It’s very simple – we’re asking for full equal rights for everybody who calls the Holy Land home. Join us as we ask the British government to Change The Record on Palestine.

it's time to change the record on palestine

‘Change The Record’ is a bold initiative to mark the centenary of the Balfour Declaration and 50 years of military occupation of the Palestinian Territories. If you believe that there should be full equal rights for everyone who calls the Holy Land home – then it’s time to Change The Record

Our response to mark the centenary of the Balfour Declaration and the need for full equal rights for everyone who calls the Holy Land home.

When we talk about Israel/Palestine, too often people feel that the issues are too complicated and they don’t know how to respond. We believe there’s a simple way to respond. If you believe that there should be full equal rights for everyone who calls the Holy Land home – then it's time to Change The Record:

His Majesty's Government view with favour the establishment in Palestine of a national home for the Jewish people, and will use their best endeavours to facilitate the achievement of this object, it being clearly understood that nothing shall be done which may prejudice the civil and religious rights of existing non-Jewish communities in Palestine."

The seeds of today’s injustice, inequality and violence were sown by the Balfour Declaration in 1917. We want to mark the anniversary with a bold act of solidarity and a call for peace with justice.

Just Walk to Jerusalem
Amos Trust supporters have completed their 3,400-kilometre 'Just Walk' from London to Jerusalem which finished on 2nd November – the 100th anniversary of Balfour. Towards the end of the pilgrimage, we walked alongside our Christian, Muslim and Jewish friends, to make the call for peace and justice for all. 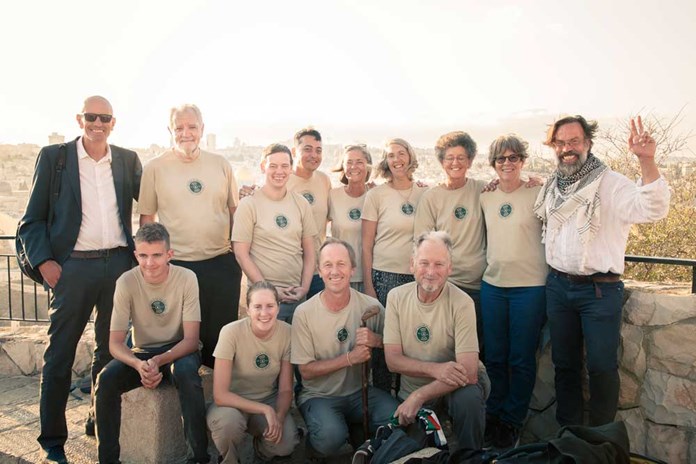 The 'All-Way' Just Walkers on the Mount of Olives overlooking the old city of Jerusalem after finishing their 3,400-kilometre journey to commemorate the centenary of the Balfour Declaration on 2nd November 2017.

Help us in asking the British government to Change The Record on Palestine — there are four ways that you can get involved.

We work with some amazing partners in Palestine. Please help.

Watch our short films about our work in Gaza and the West Bank.

Sign up to receive our newspaper — ‛Words Of Hope’ three times a year.