Amos trustee Robin Message wrote a poem in response to our ‘Once In A Lifetime’ Climate Justice summit which took place in Cambridge in September. He was responding particularly to the powerful panel discussions on how the climate crisis falls strongly on women and children, but also on how often women and children are the first to respond effectively to the crisis. 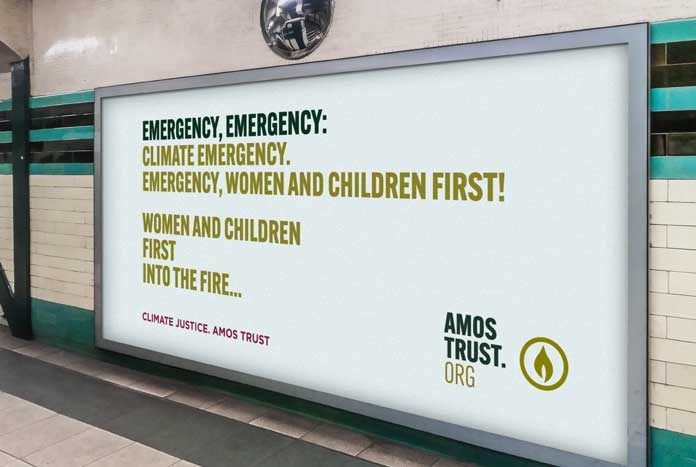 Women and children
First
Into the fire.

Women, mothers, to feed whole families
With crops that are missing
Taken by the rains
That never came.

Children, daughters, fatherless
Their dads, their papa
Taken by the rains
That came too much.
Not even a grave to visit
His body lost in the floods.
Disruption of hydrological systems, they said
Now we can't even bury our dead.

Women and Children
First
To lead us.

Because of their innocence
Their sense of justice
The empathy we drill into them
From the moment a doll is pushed into a chubby hand.
Which leads them to say:
Stop. No more. This isn't right.

Mary, a teenage mother whose openness and care
Started a revolution of love.

The women of Uganda planting forests.
Tree. By. Tree.

The communities of Nicaragua
Greening a land made barren
By the poisonous hot air of white men.

And women.
Women helping women grow the vegetables of home
The Kodu gourd, the Naga Morich chilli,
in the choking streets of a polluted city
Where children are sacrificed on the altar of the engine.

Greta Thunberg, spurned like the prophet she is
Scorned and insulted for telling leaders what they already know.
She excoriates the powerful
And the fragile egos stay away.
She isn’t the woman we deserve
Or the man we expected
But perhaps she is the girl we needed.