“It’s like on a flight. When the flight attendant says, ‘Make sure you put your own breathing mask on first, before helping the person next to you.’ She is absolutely right. If we can’t breathe we are of no use to anyone.” Karin Joseph writes about the first On Her Terms conference in Devon in October 2018. 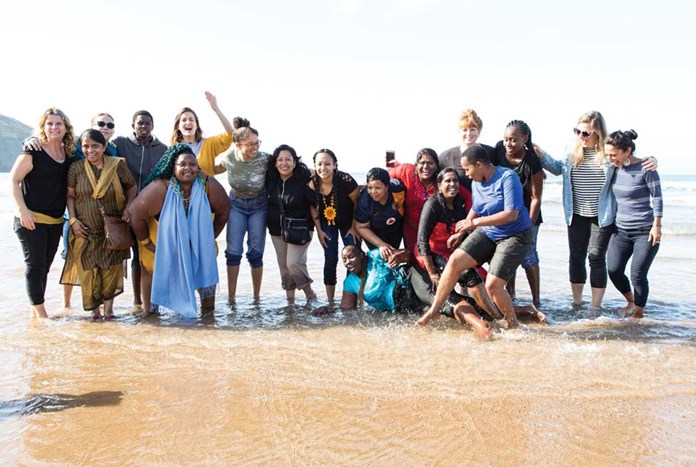 Beach Day: “We swam in the sea, fully clothed in the October Atlantic; hysterical laughter pealed through the air.” The On Her Terms participants and Amos staff  practising self-care on Putsborough Beach — October 2018.

We swam in the sea, fully clothed in the October Atlantic; hysterical laughter pealed through the air. It was Thursday, and we had come down to the beach, taking a breather from our workshop sessions to make the most of a sunny, lunchtime break.

One participant reflected that this week gave her a chance to be surrounded by ‘trees not concrete… no pollution, no problems!’ Many expressed how good it was to be able to have the space to step away from the challenges of their day-to-day, frontline work with young women and girls; to meet others doing the same and to build a network of support that crosses boundaries.

And these boundaries — (of language, context, and culture) — fell down all week. Women from Egypt, Mexico, the USA, Tanzania, from the UK, Kenya, India and South Africa spent time listening to each other, sharing their approaches with young women on the streets, and supporting each other in finding solutions to the challenges their girls face.

One participant reflected that this week gave her a chance to be surrounded by ‘trees not concrete… no pollution, no problems!’

Despite their vastly different settings and contexts, there were far more commonalities than differences in their experiences and those of the girls whom they support. “We all smile the same,” (Ifasina).

What came out strongly from these women is that this work is relentless. It is subject to so many threats and hazards (political, financial, organisational), and these hazards can even extend to their own personal safety when fighting for the rights of marginalised groups on the streets.

Rosa and Lola have both been working with children on the streets of Mexico City with their organisation Casa Alianza for close to twenty-five years. They shared how they’ve kept their lifelong commitment to this work; a vocation, not merely a job. 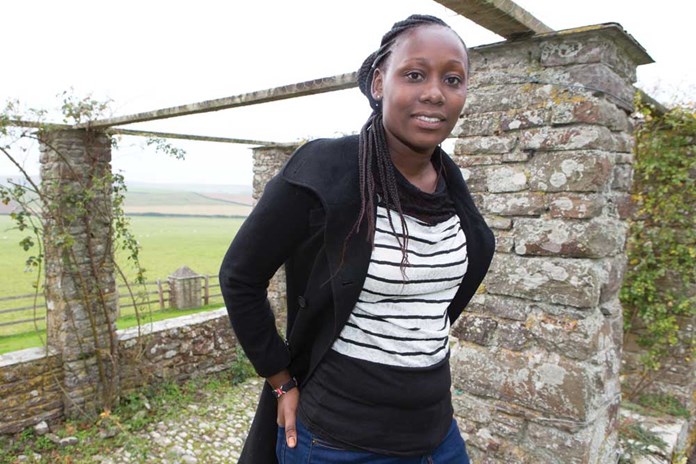 On Beatrice’s Terms :
Lead girls’ social worker at Glad’s House in Kenya, Beatrice was visiting the UK for the first time  as part of the On Her Terms conference in Devon — October 2018.

Nyangi, who teaches self-defence to young women involved in commercial sex work, taught us her techniques and spoke of her dreams to expand her self-defence training so that it reaches younger girls in schools in Tanzania.

Liz, from Kenya, and Julia, from San Francisco, spoke of the challenges they shared when working with girls in prison; how being imprisoned affects a girl’s view of herself and of the world around her.

What came out strongly from these women is that this work is relentless.

Selvam and Bhuvana, street outreach workers in Chennai, India, led us in their Theatre of the Oppressed methodology — a powerful tool they use with pavement-dwelling communities to enable them to come up with their own solutions and talk about controversial issues.

What was also shared was that their work, particularly in organisations which are not solely focussed on girls, is often isolating and overwhelming and progress is slow and halting. This can quickly demoralise. Challenging community acceptance of child marriage, for example, takes years of pushing for change, as does campaigning for changes to police treatment of children on the streets. 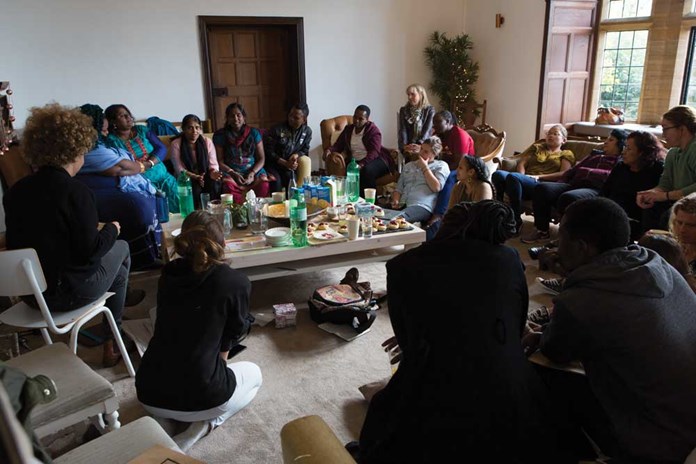 No boundaries
Differences start to fall away as the On Her Terms participants  from Egypt, Mexico, USA, Tanzania, Kenya, India, South Africa and  the UK start to relax in Devon.

But in Devon, On Her Terms became a place to pause on their journey. “The idea of being recognised to come here and talk about what we do is, in itself, a huge moment.” (Beatrice, Kenya). Here they were able to take up the space they are rarely able to claim, to talk as professionals, teach their peers and learn.

They laughed, cried and worked together; planned future action together. It also became a space to breathe, to connect as women, to cook for each other, teach each other dances, to feel free and run into the sea with each other! We spent time learning about what works and what doesn’t work well with young women on the streets.

The idea of being recognised to come here and talk about what we do is, in itself, a huge moment.”
Beatrice, Kenya

The consensus was clear — going in with our own fixed agendas, seeking hard outcomes, expecting progress in short time-frames, and relying on burned-out workers, all led to failure. Whereas a focus on trust and relationship-building, enabling decisions to be led by the girls themselves, keeping a flexible approach and the awareness that progress takes time and can look different for each young woman — these are the values that need to underpin the work with girls and young women on the street.

Nobel Peace Laureate Leymah Gbowee, in her account of Liberia during and after the civil war, recounts memories of her early work going to war-torn villages on behalf of an NGO to conduct activities with the women and children there. She went equipped with activities, exercises, methodologies in her ‘toolkit’ to help them.

When she arrived, the women in the village sat in a circle and she asked them to quickly introduce themselves to the group before they got going with the actual session she’d planned. Five hours later, the introductions were still ongoing; the fire was burning embers and food had been brought so that the circle could continue.

The experiences of the women of the village were unimaginably hard. They also had pressing immediate needs, for themselves and their families. But what these women needed urgently, more than anything, Gbowee realised, was to tell their stories and be heard by each other.

The space for girls and young women to tell their own story, be heard, and responded to, is key to the work On Her Terms sets out to achieve. Too often, young women and girls on the streets are spoken for, or spoken about, in terms that they’d never choose  for themselves.

Alternatively, these girls’ stories are forgotten about and their rights and potential ignored — in the juvenile jail in San Francisco, the pavement-dwelling communities in Chennai, the estates of south London, or on the streets of Durban.

The space for girls and young women to tell their own story, be heard, and responded to, is key to the work On Her Terms sets out to achieve.

Telling their own stories and those of the girls they work with, became a central thread running through our workshop in Devon. As a group, we were introduced to a way of telling our own story, which builds up our power and gives our story the context and space it deserves. Being heard by other women was necessary and empowering. Already, these techniques are being used by women in their work with girls in their communities.

The simple truth is that unless we care for the workers, then we cannot care for girls and young women on the street. Unless these women feel supported and empowered, able to persevere in the face of numerous challenges, able to tell their story and to work through the issues and difficulties they face, then we can’t expect the girls to be able to go through the same process.

I can see myself in each of your stories.
Liz, Kenya

As one of the facilitators said, “It’s like on a flight. When the flight attendant says, ‘Make sure you put your own breathing mask on first, before helping the person next to you.’ She is absolutely right. If we can’t breathe we are of no use to anyone.”

Devon gave these women a chance to breathe to step back and to start to dream of the world they want for the girls and young women they work with. It also gave us a chance to stop, to listen and to learn — to identify how ‘we together’ start to take On Her Terms forward.

As part of this we began exciting work on a global statement of rights for young women and girls on the street — statements of intent and action towards a world where girls experience no barriers — and as the women go back to their projects they will be enabling the voices of the girls’ they work with, to be added to this from around the world.

We are at the start of the next part of an exciting journey. Already this is being championed by the Amos community in the UK, starting with the amazing community support we received in Devon: people hosting us in their homes, cooking for us, putting on community events, and now through people being involved in fundraising challenges and becoming regular givers.

To launch our ‘On Her Terms’ campaign, we invited four young women from our partner Cheka Sana Tanzania, to join us in running the Zanzibar Half Marathon. Please watch our short film ‘Run Without Fear’ about how they got on.