Restoring a Sense of Dignity

“On Her Terms is transforming the lives of girls and young women on the streets so that they can be free from abuse. We are journeying with them as they take control of their lives, challenging the daily injustices they experience.” Karin Joseph writes about some of the difficulties of journeying with girls and young women who live on the streets. 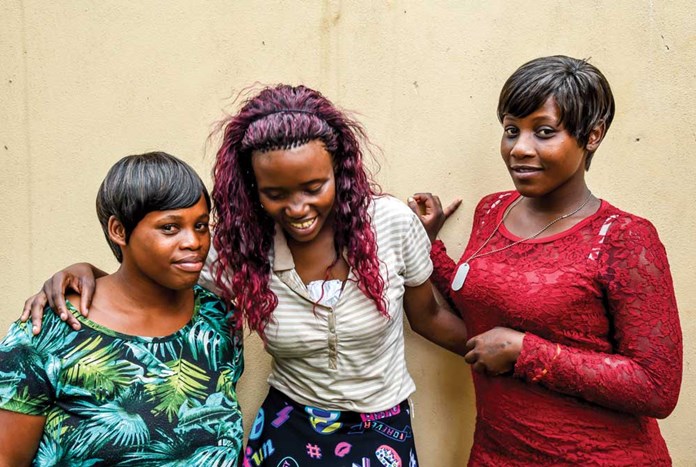 When you arrive at Umthombo around 9 o’clock on a weekday morning, you are met with a hive of activity. Bongiwe, the cook, is preparing breakfast porridge whilst getting lunch ready in advance in huge pots on the stove.

Down the side of the building, in the already hot sun, laundry is well underway at the sinks, with girls washing their clothes and those of their small children. Laughter (and cries) from the group of toddlers and babies who have arrived with their mothers can be heard from another room, where they are being cared for by an Umthombo staff member. Whilst waiting their turn at the laundry, other girls are making use of the bathroom to wash themselves, freshen up, and give their babies a bath.

These young women have chosen to come to Umthombo’s centre this morning from across the city of Durban, from where they live with their babies on the streets or in abandoned buildings. Hloniphile, Umthombo’s girls’ outreach coordinator, knows where they stay. She reaches out to them regularly, letting them know that they aren’t alone and that there are people who care, who can help them move their lives forward when they’re ready.

Whilst waiting their turn at the laundry, other girls are making use of the bathroom to wash themselves, freshen up, and give their babies a bath.

Hloniphile has been building relationships with some of these girls over many months, or even years, before they choose to come to the centre and access further support. Later that morning, a local volunteer joins the girls with a bag of hairdressing equipment and supplies. Together, these young women teach each other and learn techniques for weave hairstyles, stitching extensions in for one another and admiring each other’s skills.

Conversation flows naturally whilst their hands work, as it would in any hair salon; Hloniphile enquires about their situations, what’s new this week, skilfully building relationships and trust whilst resting one of their babies on her hip. These morning rituals: having a shower, using toiletries, putting the laundry on, bathing your child, and doing your hair with some friends — may not seem out of the ordinary. 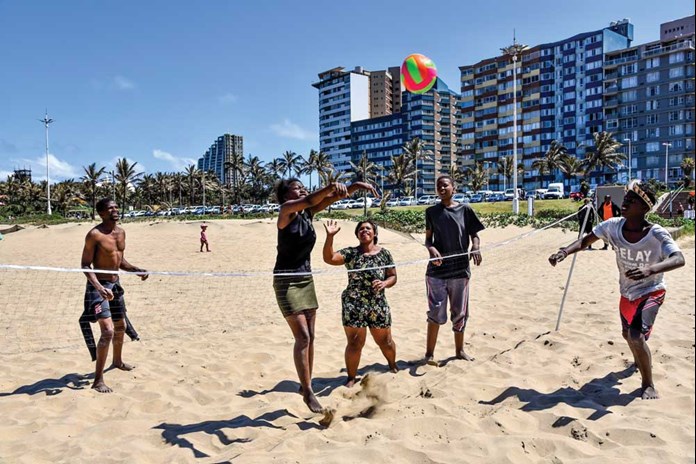 Beach time: Young people from Umthombo’s post-16 programme, as well as those still currently living on the street, enjoy a day at the beach with the Umthombo team, playing games and building friendships.

But this is key to the success of the work and holds far greater significance than it may appear. These rituals give a sense of normality to girls whose lives are highly unpredictable and often deeply unhappy. They help to restore a sense of dignity and are also deeply pragmatic. If you look clean and your baby is in fresh clothes, you’re less likely to be turned away from the supermarket or clinic. You’re less likely to be judged by passers-by, commented about or mistreated. The sad reality is you are more likely to be treated as human.

These morning rituals: having a shower, using toiletries, putting the laundry on, bathing your child, and doing your hair with some friends — may not seem out of the ordinary.

These activities provide a natural way in for Hloniphile and her colleagues at Umthombo to start building trust, to eventually hear a girl’s story and to be invited in to support the changes she wants to make. Unlike many of the boys Umthombo supports, a large number of the girls feel they can never go home because of family rejection or because home is a source of abuse.

One social worker shared how a girl described why she’d decided to come to the streets — “it’s better to be abused by someone you don’t know, than someone you do.” The workers explained how heart-breaking and hard the work with young women is — especially if they have become mothers on the streets, are HIV positive, or highly reliant on substances.

Each one of these factors makes a positive future feel out of reach for the increasing number of girls Umthombo is meeting. But hope does exist in Umthombo’s commitment to journey alongside these girls towards a more hopeful future and is working tirelessly to ensure a regular and strong presence in their lives.

The hope in Umthombo’s work is personified in Joy, one of Umthombo’s interns. Joy met Hloniphile not too long ago, when she was living on Durban’s streets with a group of young women. She had come to Durban from a rural part of the province, to gain employment after her mother died and because her father was failing to provide for her younger siblings.

After staying with relatives and a boyfriend in Durban, which didn’t work out, Joy found herself meeting a group of young women and living with them in an abandoned building downtown. “Soon, I realised that there’s a certain lifestyle that these women were living by. I was told, ‘These are the rules. You have to find a boyfriend that will take care of you.’ I didn’t want to do that. But I was forced to, I needed a place to stay and be protected. I didn’t love him, but I found someone, because I wanted to stay here in town to try and earn some money for my brother and sisters.”

Like almost all of the girls she meets, it took time for Hloniphile to build trust with Joy. The other young women on the street encouraged Joy to stay with them, not to seek a different future. But a three-day Umthombo camp that Joy attended with these young women was a transformational moment for her.

Soon, I realised that there’s a certain lifestyle that these women were living by. I was told, ‘These are the rules. You have to find a boyfriend that will take care of you.’ I didn’t want to do that.

She was asked to think of three goals which she wanted to achieve in the next three months, with Umthombo’s help. She was told she could come and hold Umthombo accountable if her goals were not progressing how she wanted. Soon, she had a new ID, had been able to register for a cashier course and was interning at Umthombo.

We set up On Her Terms so that girls like Joy can live free from abuse. So that inspirational women like Hloniphile can share their learning. So that women workers who experience so much heartbreak can find support from one another. So that we, who desperately want to see their work thrive, can support them in their journey with girls on the streets.

This work with young women is desperately hard. The numbers involved will never be huge — it’s just so difficult to reach these young women and to journey with them in any sort of authentic manner. That is why we need your support and for you to draw others into supporting this work, to give these girls who never had a first chance, a second.

Find out more about our On Her Terms campaign.