Sakthi on the streets of Chennai

“If you respect us, you’ll listen to us. If you listen to us — you’ll protect us. Please protect us.” Safety for girls on the street is a daily struggle and the options open to them are often slim; many families decide that child marriage is the safest option for their teenage daughters. On Her Terms Lead Karin Joseph shares her experience of a recent visit to Karunalaya, Amos’ partner in Chennai, India. 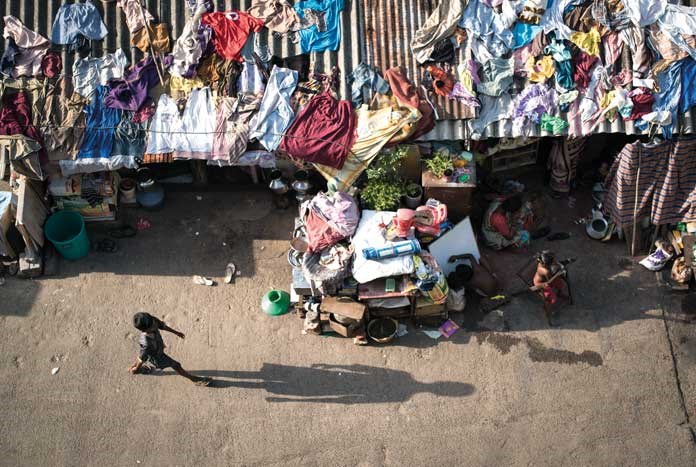 Street-dwelling: Karunalaya has been working with pavement communities for nearly twenty-five years. They help them to develop street theatre programmes and encourage pavement-dwellers to self-organise and demand their rights.

Each day, Karunalaya’s team builds ‘sakthi’ in the young people and the communities they work with on the streets of Chennai. Sakthi is the Tamil word for ‘inner power’, something that nobody can take away from you.” Paul Sunder Singh, Karunalaya — Chennai, India

The heat is punishing even late in the afternoon, at Karunalaya’s centre in north Chennai in June. The large dusty yard is set up with two football goals and the boys staying at the centre play with full energy, unfazed by the heat, introducing themselves to me as Neymar and Messi.

But a banner of smiling faces on the wall celebrates a recent victory in a different sport: in May, Karunalaya led the winning Indian team to claim the trophy at the first ever Street Child Cricket World Cup, with the final held at the iconic Lords’ Cricket Ground in London.

Monisha, Nagalakshmi, Suryaprakash and captain Paulraj from Karunalaya played as Team India South, alongside four other young people from Mumbai. The sport is so popular in India that the country fielded a team from the North too. Street Child United’s inaugural competition brought together 8 mixed teams, not only to play fantastic, nail-biting cricket, but to represent the rights of children on the streets. 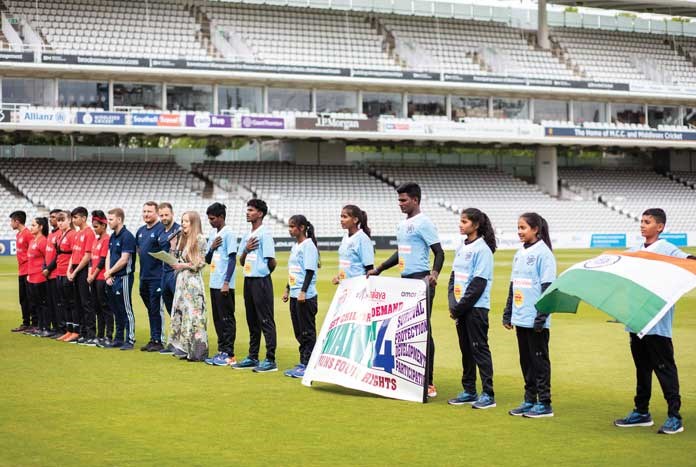 National Pride: Team India South proudly hold their flag for the anthems, ahead of their World Cup final at Lords’ where they beat a strong England team.

Team India South blazed a convincing trail to the final, beating a strong Team England with a six in front of a cheering crowd. And although their victory in the sporting competition was of course a great achievement for them, it was also a hugely important platform for them to speak about the lives of children on the streets. During the events around the competition, Team India’s youngest member Monisha, aged fourteen, shared her team’s demands.

Street Child United’s inaugural competition brought together 8 mixed teams, not only to play fantastic, nail-biting cricket, but to represent the rights of children on the streets.

Monisha lives on the streets of Chennai with her family, alongside dozens of other families whose home is the pavement. She spoke about the daily challenges of life in a pavement-dwelling community: threats from the police, the risk of sexual abuse because of having no safe home, limited access to toilets and sanitation. All challenges that are heightened for girls and young women.

Monisha’s impassioned address ended: “If you respect us, you’ll listen to us. If you listen to us – you’ll protect us. Please protect us.” Safety for girls on the street is a daily struggle and the options open to them are often slim; many families decide that child marriage is the safest option for their teenage daughters.

Karunalaya has been working with pavement communities like Monisha’s, and her teammate Paulraj’s, for nearly twenty-five years. Their staff are a constant presence on the streets. They help the communities to organise street theatre programmes about difficult topics like child marriage or substance abuse. They encourage pavement-dwellers to self-organise and demand their rights through Pavement Dwellers’ Rights Associations. They provide supplementary classes to help children keep up in school and promote girls’ education in the face of high rates of early marriage or child labour. They counsel couples and families and respond to situations of abuse and violence when women and children come to them for help.

The women workers of Karunalaya have spent years building relationships with community members and it is this groundwork which means that today, they are invited in. What’s most noticeable when I’m walking with Phinora and Bhuvana, through the communities, is the warmth and trust with which they’re welcomed. Now in many communities, the families themselves run programmes autonomously, such as Rights’ associations and children’s clubs.

One of the biggest barriers, Phinora told me, when going to work with communities at first, is that they assume you will just give them a handout... ‘gradually we explain that we are wanting to talk to them about their rights.’

By raising awareness of community rights, Karunalaya has been mobilising thousands of people across Chennai to stand up to injustice, and demand the rights that are theirs. They feel that events like the Street Child Cricket World Cup provide a great platform on which to make these demands heard, internationally, but also at home in Chennai.

Their victory was proudly celebrated at home, receiving coverage in almost all the national Indian papers, as well as TV, radio and international press. I asked Monisha and Paulraj what it was like to return triumphant to their communities with the World Cup in hand? Both said that their families were unbelievably proud of them. 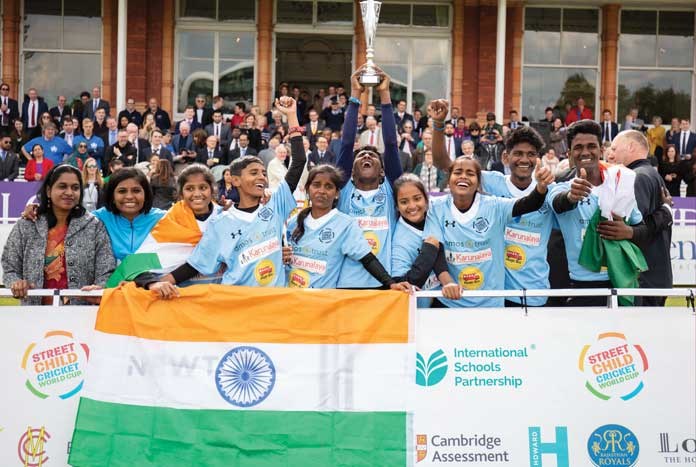 Sweet Victory: Team India celebrating behind their flag after winning the Street Child Cricket World Cup at Lords’ — 6th May, 2019

Paulraj’s dad, who works as a loader in a shoe factory, told all of his colleagues about it; none of them could believe that the son of someone who lived on the streets would captain a team to a World Cup victory. It had an immediate impact in Monisha’s community as she began to be recognised by people, even the police asked if she was the girl in all the papers.

Hearing about her demands and what she’d achieved, in this way, led to the police promising her mother that they’d no longer harass her community. The three older team members have all graduated from secondary school and are applying to colleges in Chennai, and Monisha continues to study at a good school nearby. But visiting them at their homes on the street a few weeks after they lifted the Cup at Lord’s was a stark reminder that daily life continues, in many ways, as before.

One of the biggest barriers, Phinora told me, when going to work with communities at first, is that they assume you will just give them a handout... ‘gradually we explain that we are wanting to talk to them about their rights.’

Back in her community, Monisha welcomed us into her family’s 3m x 3m home and explained that at night only the smallest children sleep inside to keep them safe from kidnap, the rest of them, including herself, sleep outside on the streets with no protection from male violence or abuse.

She and other girls in the community are then up early between 3am-4am to ensure they can wash out of sight, as the public toilets, essential for her community, are locked at 6 p.m. and not opened again until 10 am, leaving sixteen hours of each day with no privacy to fulfil their basic needs.

So Karunalaya continually invests in the sakthi of young people, especially girls, on the streets, teaching them to demand their rights, and the rights of others. Monisha and her teammates are demanding protection, from anyone who’ll listen — and they don’t show signs of stopping.