From Beirut to Jerusalem

Orthopaedic surgeon and Gaza Freedom Flotilla participant — the inspirational Dr Swee Ang joined us at Amos Day back in September. Swee was the first female orthopaedic consultant appointed to the St Bartholomew and the Royal London Hospitals and is a co-founder of Medical Aid for Palestinians (MAP). Gill Hewitt spoke to her. 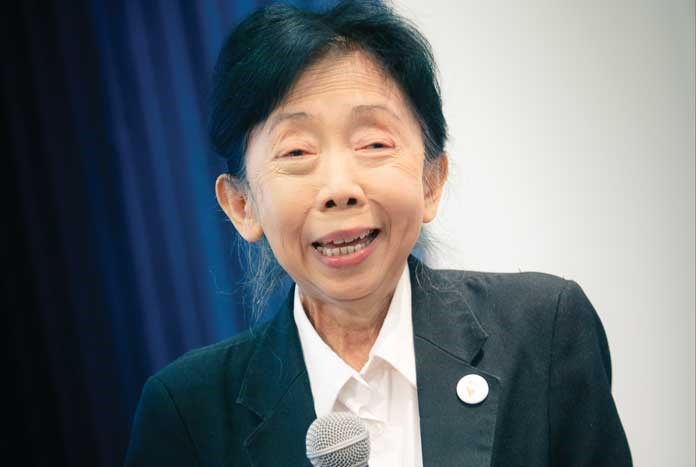 “Palestine is even bigger, the 750,000 Palestinians driven into exile, have now become 6.5 million and we have to support them. No two ways about it, because now, with American policy, cutting their support for the UN, food rations will go down, schools will close, they will suffer.” Dr Swee Ang.

We were very privileged to be able to hear from Dr Swee Chai Ang at Amos Day back in September. The stories and thoughts she shared about her involvement in the most recent Gaza Flotilla were incredibly inspiring and challenging and created an electric atmosphere in the room.

Gill Hewitt was able to grab a quick chat with her before she spoke to the meeting and we have picked out a few highlights from their conversation.

You’re approaching a significant birthday where most people might be planning a big party or a special holiday but you decided to do something completely different, something mad and dangerous, but ultimately true to yourself, tell us what you decided to do?

When a friend asks, ‘Can you visit us?’ The answer is always ‘yes.’ My family all were up in arms so I said, look here, my birthday is coming, and I’m entitled to a birthday present, not to myself but to them. So this will be my birthday present to them. After that, they all agreed!

So what happened? I think you were possibly aware of what the likely outcome would be before you set off.

The outcome was, I think, predictable. Flotillas have been attempting to go regularly since Gaza was under blockade, and only the first flotilla got in. The one in 2010 had ten of the delegates killed, 9 instantly, and one from his wounds later on. Subsequently, many boats tried to get in, all of them were captured, the
boats sold, and the people on the boat put in prison and then deported. So this is not an exception.

But you see the reason why we are going, is maybe two-fold. Firstly, the situation in Gaza is as bad as ever, and secondly, what is happening now is that from 30th March onwards, the people in Gaza have launched the Great March of Return protests and the Israeli’s have responded with a policy of shooting to maim. So, Israeli Army snipers have shot at unarmed demonstrators, wounding them deliberately, especially in their legs so that they will never walk again. That’s a very cruel policy. If you maim someone they will remain crippled, especially in a place like Gaza, unable to do any work; and will continue to demoralise the communities. So the price is very high.

But the resilience of the Palestinians is such that they’re launching another unarmed demonstration. Of course, the shocking thing is that this time they’re
being shot to cripple. And the high-velocity gunshot wounds are much more difficult to treat.

Gaza has been under blockade for 12 years, the hospitals are depleted of resources, electricity is very scarce, and the whole community is suffering. And, you know, I think the Gazans are at the end of their tether — they want to show that despite their suffering, despite the blockade, they will still demand their rights to return home. So I have to go and try to take medicines and show my solidarity.

So the result so far of the Freedom Flotilla, apart from your imprisonment and those of the rest of the crew has been the confiscation of the drugs that
haven’t reached Gaza; the selling of the boats that you sailed in for Israeli projects, and you have been banned from Palestine — I believe for the second
time?

Yes, I don’t know whether the banning is cumulative. If it is, then I think in my lifetime I’ll never be allowed to go back. When they intercepted us with all our drugs, intravenous antibiotics and dressings, it was in international water, so they’ve got no right to intercept us. They could have let us sail into Gaza
waters and then get us, saying we have entered Gaza waters illegally, but then that would create a dispute on whether the blockade of Gaza is legal and that’s a
whole can of worms, for them.

If you maim someone they will remain crippled, especially in a place like Gaza, unable to do any work; and will continue to demoralise the communities. So the price is very high.”

We were very well prepared. We were unarmed. We spent two days learning non-violence, so nobody loses their temper or uses bad words against the Israeli army. The Flotilla is completely tracked by satellite, so you can see exactly where they intercepted us in international waters and you can see the track (we
took) from that point onwards, forcing us into the Israeli port — Ashdod.

So I think the technical term for what happened, is piracy. But nobody’s allowed to use that word. So I will say, ‘they abducted us and forced us into their territory, put us in prison and stole all our belongings and made life pretty miserable.’

And you sustained injuries?

Yes, to my ribs, and the captain was treated appallingly. We had a Norwegian fishing boat. It’s a good boat, very strong and sturdy and completely refurbished.
So the idea is that we donate the boat to Gaza and that’s donation number one.

Then we had 114 boxes of intravenous antibiotics and dressings and a special type of antibiotic for treating severe sepsis, which they had requested, and that we had sourced with the help of Amos Trust and others. What has happened is called robbery.

You’ve been involved in this struggle for a long time but we see the situation getting worse, not better. Do you have hope?

The Palestinians have risen above every tragedy. After the Sabra and Chatila massacres, when I first met Palestinians when I was working as a trauma
surgeon, the children, you know they inspired me. They’re not afraid, they’re standing before destroyed homes and mass graves and a new generation has
grown up. I’ve just come back from Beirut, for the commemoration of the massacres. Every year, I’m so moved, when I see Palestinian refugee children
coming from all over Lebanon to commemorate. They’re growing up and so Palestine is still there, it exists in them.

So I think the technical term for what happened, is piracy. But nobody’s allowed to use that word.”

Palestine is even bigger, the 750,000 Palestinians driven into exile, have now become 6.5 million and we have to support them. No two ways about it,
because now, with American policy, cutting their support for the UN, food rations will go down, schools will close, they will suffer.

This is the time when we who support the Palestinians have a real chance of standing up for them and helping them, and if we will, there will be justice and there will be peace and freedom. We know it is a long road. But we’re strong. We
might be growing old, but the younger people are there and they are strong.

So I am very optimistic. It’s going to be a tough struggle, but let’s be strong. I am an Orthopaedic surgeon at The Barts and Royal London Hospital and my colleagues were so worried for me, they were sharing all the messages I sent with each other and so on.

The moment I stepped into our department for a morning meeting after I was released, they all clapped. They are not clapping for me — they are clapping for the Palestinians. It was so moving. Normally orthopaedic surgeons are quite right wing, but it’s changing. It’s changing. Because people love justice, we can’t help it. Because God made us that way.

‘From Beirut to Jerusalem’, is published by The Other Press and is available now through our website with all proceeds going towards our Woman 4 Woman Appeal for the women of Gaza.

Under blockade since 2007, please watch our short film about Gaza — ‘Open The Borders’