Chris Rose visited Al Ahli Hospital and NECC in Gaza City in October.  Here he writes about how these two Amos partners continue to do such important work under such difficult circumstances. 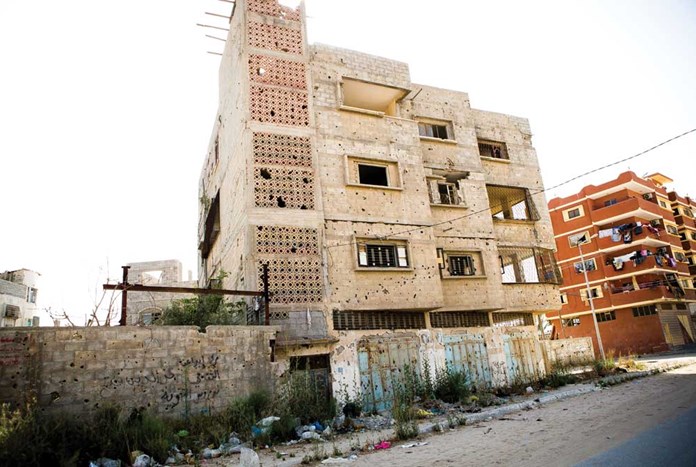 Open the borders: the on-going blockade and daily power cuts in Gaza are having a devastating impact. Photograph: © Amos Trust/Nick Welsh

Each of the first-year students is cutting out their own keys in fibreboard. They have just started this two-year course, so this is lesson 101 for these young people, (aged 14–16), who have dropped out of school and are now learning a trade at NECC’s TVET programme in Shejaiya, Gaza City.

We chat and laugh with them about football and why they are on the course, and I try to explain that above the altar/table at St Clement’s, (Amos’ home), hangs a Key of Return — an installation with the names of the 500 abandoned Palestinian villages (from 1948), which the 1.2 million refugees in Gaza  call home.

We ask if any have attended the Great March of Return marches, which have been running for the last 6 months — the tutor laughs and says, of course, they all have. A few minutes later at the NECC primary care clinic, a 12-year old boy limps past; he has been there to get treatment for his wound and a new dressing. He is one of the 5,502 people injured by live ammunition during these predominantly peaceful demonstrations.

Dr Issa Tarazi, the Executive Director of NECC, tells me how the Israeli’s are using fragmentation bullets that disintegrate on impact and shatter the bone. This leads to complex surgery (often involving multiple operations), and the need for frequent dressing changes and antibiotics, which people cannot afford.

We ask if any have attended the Great March of Return marches, which have been running for the last 6 months — the tutor laughs and says, of course, they all have.

Dr Mayer Ayyad, Medical Director at the Al Ahli Hospital, picks this up and tells me that 190 children/ young adults are waiting for amputations because they have developed infections and their legs are not healing properly — nearly all of these could have been avoided.

Gaza’s health service is not coping. Patients are being released too quickly, essential drugs are on zero stock and many people rely on Al Ahli for surgery. Both Al Ahli and NECC also provide ongoing treatment, offering this free to those that cannot afford to pay.

Dr Issa Tarazi, the Executive Director of NECC, tells me how the Israeli’s are using fragmentation bullets that disintegrate on impact and shatter the bone.

“When life and death are equal. When people cannot see that one is better than the other, it is very worrying. For many in Gaza, this is the case. This is why they march and will continue to march.”  Dr Suhaila Tarazzi, Al Ahli director.

Suhaila went on to talk of a 19-year-old whose leg they had to amputate. He was an avid footballer and was in despair. When he came in for follow-on care, the doctors noticed, and Suhaila and others started to talk to him about life and the options ahead. Gradually through their support, he has started to hope — this week he came in smiling saying how he has started to play football for those with 1 leg and to say to others they must not despair. 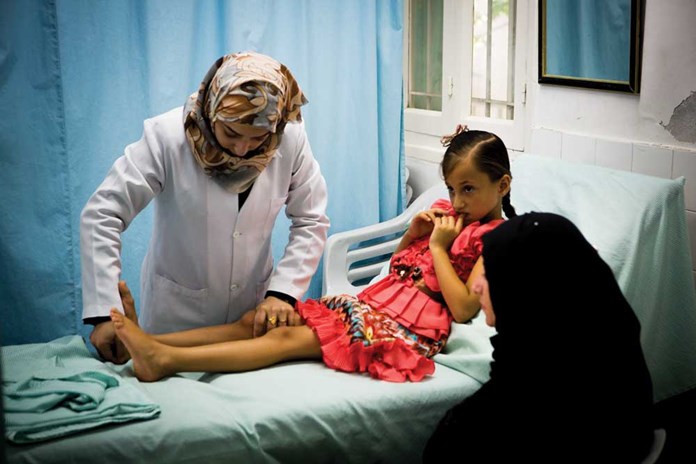 A Place of Peace:
Al Ahli, in the centre of Gaza City, treats over 45,000 patients each year. It is a haven of peace and hope in the middle of one of the world’s most troubled areas. Restrictions on movement and imports mean that the Al Ahli Hospital is often without basic medicines and life is made even more stressful with limited supplies of electricity, food, water, fuel and personnel.

The hospital described their desire to provide more psychosocial support for young people who have been shot and injured. We already support the psychosocial aspect of NECC’s TVET programmes and have supported the hospital’s children’s programme and are looking at how we can respond.

Sarah, who was accompanying me, is a systemic psychotherapist, specialising in families and young people and is also a qualified supervisor. Her view was that the quality of care provided was of a very high standard with well thought-through programmes and very strong support for the frontline workers from Lubna, the Health Programme Coordinator at NECC, and Mohammed Naqa, the social work lead at Al Ahli Hospital.

When life and death are equal. When people cannot see that one is better than the other, it is very worrying. For many in Gaza, this is the case. This is why they march and will continue to march.”
Dr Suhaila Tarazzi, Al Ahli director.

Lubna took us to see NECC’s Early Years’ clinic, which is so busy providing integrated care in some of the most needy parts of Gaza. All of the NECC and Al Ahli’s early years’ nutrition and care programmes are inundated with families. The on-going blockade and daily power cuts, (20 hours a day), are having a devastating impact — 30% of children are anaemic; many have diseases caused by deteriorating sanitation and many more are malnourished.

Lubna then introduced us to their psychosocial programmes (run daily) for children and young people in these local areas. They use mixed groups for children and separate into girls’ and boys’ groups as they become teenagers. These groups help these children to live with the on-going trauma and stress they experience, to help them to breathe, to laugh, to dance, to draw, to build their resilience and to have hope. For the girls, it is a chance to talk about their lives, of the violence and difficulties they experience and what it means to be a girl living in Gaza.

NECC TVET programmes are massively oversubscribed as youth unemployment is well over 60%. The team at NECC are always seeking to ensure that their programmes meet up with any shortages in the labour market. They have made a major revamp to their women’s sewing programmes and have created new courses in air conditioning and solar energy. They have also developed their support-into-employment for graduates and created a new programme which trains young people in entrepreneurial skills and gives microcredit grants to those with the ‘most-likely-to-succeed’ ideas.

Mohammed and Suhaila described how Al Ahli is leading on ‘Rosey October’ (named after the pink ribbon which marks Breast Cancer awareness month). They were particularly keen to pass on their thanks to all those involved in Women 4 Women and for making sure that the women in Gaza are not forgotten. They went on to talk about how those who have been through treatment no longer want to call themselves survivors, but ‘Challengers’. As they have challenged and continue to challenge the diagnoses and they encourage others to challenge this and to fight against cancer.

These groups help these children to live with the on-going trauma and stress they experience, to help them to breathe, to laugh, to dance, to draw, to build their resilience and to have hope.

Dr Mayer said there is some evidence that survival rates are improving as a result of the hospital’s community outreach and through similar initiatives and are getting up towards 45%, 5 years after treatment (in the UK it is over 81%). More women are starting to self-examine, they are going for treatment earlier and awareness levels are rising among men.

However, the massive shortages of chemotherapy drugs (women cannot complete a term); the lack of any radiotherapy in Gaza; the difficulty of gaining permission from Israeli authorities to travel to the West Bank for treatment, and the high cost of this to a society on its knees, means that progress is limited.

There is a long way to go before women in Gaza can get the treatment readily available to women living less than 5 miles away in Israel.

Open The Borders: Under blockade since 2007, watch our short film about Gaza.