Tara Wigley tells the story of her first-time marathon — in Palestine. “I thought we were going on the culinary tour,” my husband said, about a week before we were due to go to Palestine with Amos Trust. 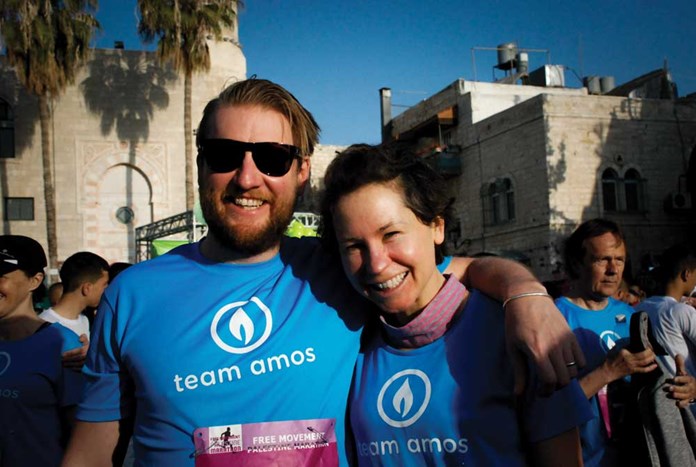 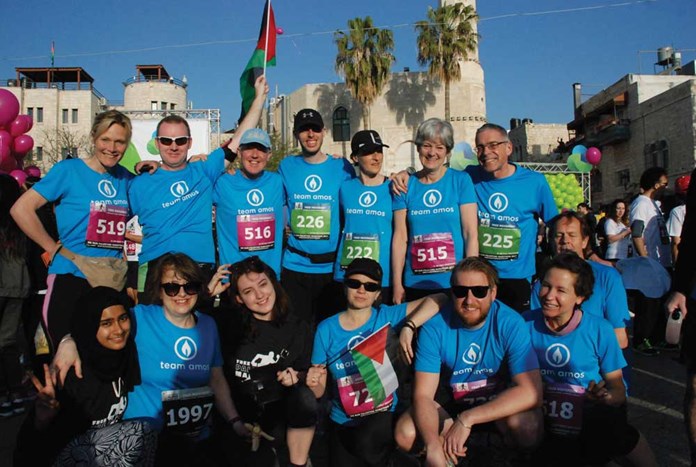 The whole of Team Amos at the Palestine Marathon startline in Manger Square with Chris and Tara bottom right. © Amos Trust/Nick Welsh

“I thought we were going on the culinary tour” my husband said, about a week before we were due to go to Palestine with Amos Trust.

Chris and I had not, suffice to say, been taking our training all that seriously. I’d half-trained for my half marathon but Chris genuinely thought that the word marathon was some sort of metaphor for the amount of falafel and hummus we were going to be eating during our time in Jerusalem and Palestine.

We did get to eat a lot of falafel and hummus, as it happened, but we also did the run. I’d imagined that we were going to be slightly less hardcore than our group of fellow runners but I didn’t actually think we’d be with a group that included a couple who were seeing in their 70th year by running a marathon every month (!) all over the world; and another lady who was doing her first half-marathon to mark her 60th birthday with her whippet-like husband who could run a marathon as easily as the rest of us can run a bath. 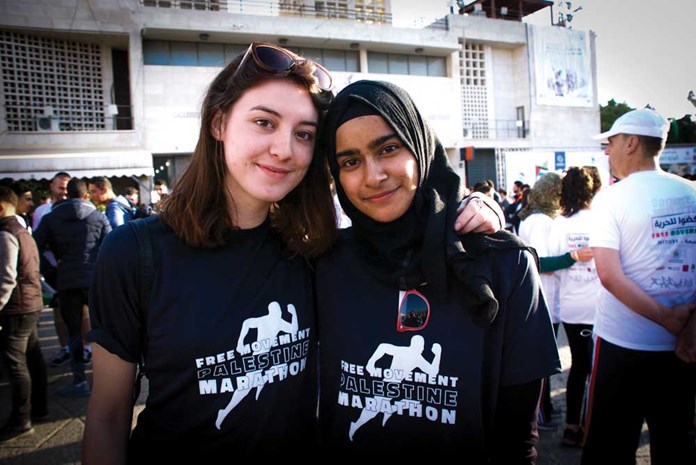 Lean On Me
Jessie and Attica, two friends from London at the start line of the Palestine Marathon — April 2017. © Amos Trust/Nick Welsh

There was Eamon from Ireland who’d run about 25 marathons and Jenny who has used running as part of her battle back from cancer. We were the muppets amidst a group of heroes. However, there was no sense of competition and no one made anyone feel anything other than welcome and chilled but, cripes, Chris and I felt a bit tired in the legs just taking the stairs to our room on the 12th floor of the Holy Family Hotel in Bethlehem the afternoon before the run.

Jollying himself along at breakfast the morning  of the run, Chris asked marathon-a-month-man whether he was ready. “I’m ready”, he said, in his deep Texan drawl.

Turns out, though, that we were too. The lack of training on both Chris and my part were more than made up for by the atmosphere which hit us the minute we entered Manger Square which was packed with 6,000 runners — locals and internationals,  all limbering up, dancing to the loud music and letting go of the many pink balloons which were there to start the party. Big smiles and photos ensued as last-minute bananas were eaten and we all set off.  It was pretty hot already and the clock had just gone past eight. 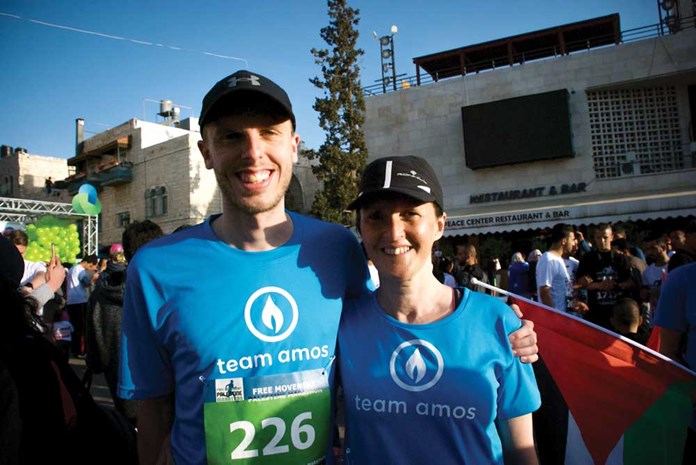 I knew that Palestine was rather hilly but the notion that ’what goes up, must come down’ did not,  I have to say, hold so true in the run where all the hills just seemed to go, quietly, up. Chris’s training had consisted of walking fast on a cross-country trainer in the gym with the gradient set to steep, so he was a super running buddy for me, who’d only half-trained on a very flat route between Dulwich and Clapham in South London.

Chris and I have been married since 2005 but we have never run together so it was actually quite a jolly get-together and we ticked off the miles one by one, him making me forget about the gradient and me encouraging him to run a little faster than he would have otherwise gone.

At about 10 miles, though, Chris dropped back and wanted to slow right down so we high-fived and off I trotted. I was feeling pretty punchy, actually, having spent the previous days eating as though I was running a marathon every day (the food is so good in Palestine that it would have been rude not to) and, crucially, having left our three young kids in London, sleeping a bit more and charging up the batteries.

Chris and I had not, suffice to say, been taking our training all that seriously. I’d half-trained for my half marathon but Chris genuinely thought that the word marathon was some sort of metaphor for the amount of falafel and hummus we were going to be eating during our time in Jerusalem and Palestine.

They were so charged, in fact — the gift of sleep, the gift of early nights, the gift of being with one’s husband for a week for the first time in too many years, the gift of not being a mum for a week! — that I found myself turning into a bit of a Duracell bunny and, seeing the finish line in my sights at 13.6 miles, thought, ‘hey, I’m not done!’

I had my sponsors on a WhatsApp group and suddenly had the not-very-sensible idea (apart from  a fundraising point of view), to put the word out that ‘if I run it twice and do a full marathon will everyone double their sponsorship?!’

Trotting on my tip toes I sent the message and, ping, straight away one of my colleagues at Ottolenghi said ‘done’ and then, ping ping ping, others were coming through, rooting me on with their doubled sponsorship.

‘Cripes, better keep going then’, I thought, imagining that I’d slow right down to an almost-walk as half-training for a half-marathon converted into quarter-training for a full marathon which really was not a very sensible or clever or grown-up thing to do.

I had my sponsors on a WhatsApp group and suddenly had the not-very-sensible idea (apart from  a fundraising point of view), to put the word out that ‘if I run it twice and do a full marathon will everyone double their sponsorship?!’

The sun was really creeping up by now so it was getting pretty hot. I plugged on, though — nothing like the sight of Separation Wall or refugee camp to make you think you can pull it out of the bag for another couple of hours — and it was all surprisingly okay.

My time for the second half of the marathon was strangely similar to my first and I’ll never forget the look on Chris’s face as I saw him finishing up on his half-marathon and signalling a loop with my hand and shouting out above the crowds, “I’m doing another loop!” It was brilliant.

I was really flagging by the last mile or two and I’ll never forget seeing first Chris and then the whole of Team Amos waiting for me at the finish line, all there and cheering me on. It was a real-life experience.

I felt like I’d been run over by a bus the next day but I wouldn’t have changed it for the world. I loved raising money, I loved being in Palestine and seeing where the money I had raised for Amos was going, I loved doing the run and I loved being part of the team. And I really really really loved all  those falafels.

If Tara’s blog post has inspired you to ‘run the Wall’, then you can sign-up to run the Palestine Marathon in March 2020 — full details here.