“Omar chuckles as he quotes Spider-Man: “‘with great power comes great responsibility.’ It’s tough to have something to fight for”, he says, still laughing, “but it’s very important... you have to be generous with your art.” Jacob Moreton writes about his encounter with the Galilee Quartet. 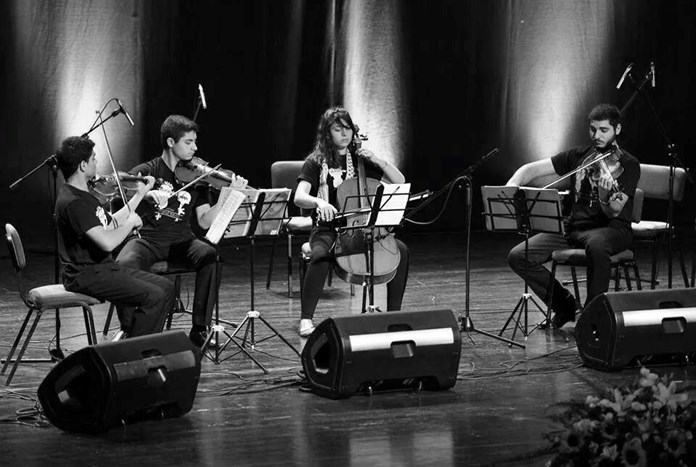 The role the Quartet feels they have to play, of representatives for a vibrant and peaceful Palestine, is of course not an easy one, even on the most superficial level. Jacob Moreton writes.

Omar Sa’ad looks me straight in the eye, his gaze unflinching, as he talks about his dream.

He says he dreams of a time when there’s no need to explain anything when he’s able to take to the stage and play a whole concert without neglecting his duty, as he sees it. When he can just play music, express his creativity, without fear that he isn’t giving his people “the right attention”.

Eloquent and fiercely smart, Omar is the eldest brother in the Galilee Quartet. This group of accomplished musicians comprises his sister and two brothers and plays both Western classical and traditional Arabic styles of music. They hail from a village called Maghar, just north of Nazareth. The Quartet was chosen to perform with eccentric virtuoso Nigel Kennedy at the 2013 London Proms, and all have been recognised nationally in Palestine’s burgeoning music scene.

But the story doesn’t stop there. Omar himself shot onto the radar of Western observers in 2013, when he refused the military service demanded of all Israeli citizens. His letter to the Israeli Defence Minister went viral. “I will not be the fuel to the fire of your war,” he wrote, with characteristic gravitas, “and will not be a soldier in your army.”

He would not swap his viola for a firearm. In doing so, he joined the small but growing network of Conscientious Objectors in Israel, which flows over and across the religious divide. All in all, he refused to join the army seven times, until Israel’s government let him off. Persistent and dogged, he has the stamina of an activist, as well the soul of an artist.

Omar himself shot onto the radar of Western observers in 2013, when he refused the military service demanded of all Israeli citizens.

The Quartet are all endowed with an impulse towards stubborn resistance, and it comes out when they play. At St James's, Piccadilly, they begin their set with an astonishingly skilful, yet also tongue-in-cheek, rendition of Beethoven. Omar is right to note that if they were from the UK, they could no doubt have been accepted into the Royal Academy or the Royal College.

Their first set, performing Western-style classical music, is unambiguously impressive. But their second open the floodgates, striking the audience with a magnificent performance of Arabic pieces. The combination of oud, violin and percussion is something to be heard, and when sister Tibah or charismatic brother Mustafa start to sing, it’s as if the whole world has been whittled down to this single performance.

They are exceptionally talented, and it’s this talent that fires the Quartet with a binding sense of duty to the Palestinian cause. They’ve got a tool at their disposal, usually denied to their people, so they feel they have no choice but to use it, to counter the prevailing narrative about Palestinian character and potential.

Omar chuckles as he quotes Spider-Man: “‘with great power comes great responsibility.’ It’s tough to have something to fight for”, he says, still laughing, “but it’s very important… You have to be generous with your art.”

But the Quartet are not musicians who also campaign, nor campaigners who also play music; they are both at once. There is no other way for Palestinians. To them, “art” and politics are the same. The occupation infects every aspect of their lives. The “general Israeli propaganda” that presents Palestinians as “animals” demands resistance with every breath, every scrap of energy. Resistance is more than a part-time pursuit, more than a political side project. Resistance is, to Omar, the very nature of being Palestinian.

The combination of oud, violin and percussion is something to be heard, and when sister Tibah or charismatic brother Mustafa start to sing, it’s as if the whole world has been whittled down to this single performance.

“Everything you did, even sport, has become political,” he asserts. In this environment, it is hardly surprising that the Quartet is ready and willing to use whatever weapons are at their disposal, in this case, music, to forge their narrative about Palestinians. They are presenting themselves to the world, or at least this small corner of it, and proclaiming that “Palestinians are people full of love, peace and harmony… We have all the abilities, all the talent, all the love, but we don’t have the opportunities.”

As a member of the Druze ethnic minority, Omar’s grandfather had the misfortune to be living in the land that would become the state of Israel in 1948. He had three choices, says Omar: “You accept Israeli citizenship, you get kicked out of your land, or you get shot.”

So the Sa’ad family stayed put and were therefore obligated to become Israeli citizens. “I am Palestinian”, Omar asserts, somewhat tersely. But this is a complicated situation, which Omar’s brother Ghandi points to when he protests that “he didn’t accept it as accepting.” It’s simply that “there was no other solution.”

The Druze are unwilling citizens of Israel. It is no surprise, then, that Omar refused to see himself “standing at the crossing and asking my friends from Ramallah and the West Bank for their identity cards.” In this sense, Omar, and the rest of his family stand firm on the very fault lines of the Israel-Palestine conflict.

The role the Quartet feels they have to play, of representatives for a vibrant and peaceful Palestine, is of course not an easy one, even on the most superficial level. I notice that after Sunday’s concert in London, they spend an extraordinary amount of time talking to the audience, chatting, sharing stories, laughing. Is that not something they get tired of? Seemingly not.

“The audience is never the same. Even our friends are not the same”, Omar says in rebuttal. “‘Guys we saw you and you were really small… but now its another thing!’” Here he raises the pitch of his voice, playing the role of a bemused aunt. This little sketch is surprisingly parochial. Despite everything, the Sa’ad family has had to deal with the same issues that affect every single other person on the planet.

“I am Palestinian”, Omar asserts, somewhat tersely. But this is a complicated situation, which Omar’s brother Ghandi points to when he protests that “he didn’t accept it as accepting.” It’s simply that “there was no other solution.”

Mostafa has said in the past, perhaps unsurprisingly, that his hobbies revolve around “girls, music, cars, food and sleeping”. Despite prodigious musical talent and their origin in one of the most unstable regions in the world, the Galilee Quartet is essentially just like the rest of us. And therein lies their appeal.

The reason they get standing ovations and pack out venues, and lines of people waiting to shake their hands, is because they are just ordinary young people who have decided to take a stand, the only way they know how: through their talent. Omar speaks the language of hope. He talks about love, peace and generosity, of inspiring people through his art.

But the situation isn’t always like that on the ground. I asked how things have changed since his original refusal to join the army. “We had a drastic change, but towards the negative side.” His tone is suddenly sombre. Government repression has increased and “every year it grows, because people are asking questions.” They don’t want to accept the narrative that comes from the Israeli media, because “during almost 70 years, you can’t just be right, and the other side is wrong.”

On one point above all Omar is equivocally clear: No oppression lasts forever, and no system based on oppression will ever reach stability. South Africa under Apartheid, or European colonies in Palestine, Lebanon, Libya, all ultimately collapsed because they were based on the oppression of the people they ruled. The shakiest of foundations. As long as Israel continues its system of oppression, he is certain that there will never be peace.

There is something in this. And when politics stumbles and falls, as it has done for decades in this conflict, what remains is ordinary people, pulling whatever levers they can, speaking truth to power, being generous with their art.

One day a just politics will stand up again in Israel and Palestine. In the meantime, Omar Sa’ad and the Galilee Quartet are busily working away, building a dialogue, one note at a time.