A Tribute to Garth Hewitt 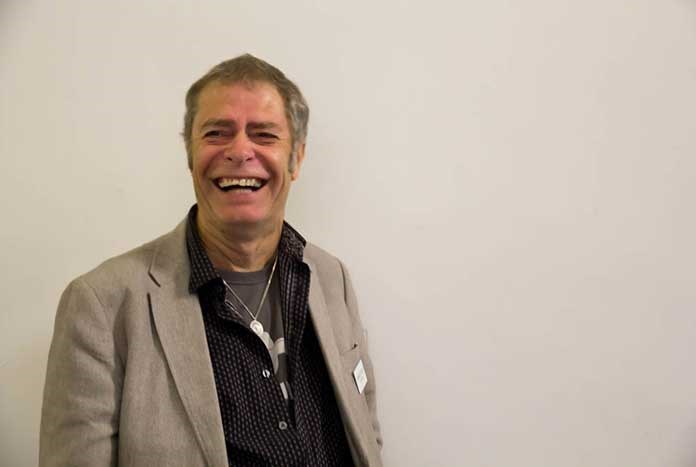 A Tribute to Garth Hewitt
December 2020

History
I first met Garth at the back end of 2003, when he came to speak at the church where I was an unpaid curate (assistant minister), about Palestine and Israel. I had been impressed by Amos’ publicity materials and knew Garth was a singer but that was as far as my knowledge of the Trust went. As a result of that weekend, the church asked if I would like to go with Amos to Palestine/Israel the following May.

The impact for many of those who have been to Palestine with Amos has been life-changing and that was the case for me in 2004. It was during the long ending of the second Intifada, the Separation Wall was just being constructed around Jerusalem — Bethlehem would come next — and there was the obvious legacy of the conflict and at times a palpable tension. I have so many memories of that trip and could write at length about it — but I want to focus on a few things that stood out then and continue to stand out.

I had the shock of my life on the first day when Garth sung 10 Measures Of Beauty in the Dominus Flevit church on the Mount of Olives looking down over Jerusalem... what had I joined? I would never have believed you then if you would have told me that I would by now have listened to it countless times, and know quite a few of the words, as our musical tastes are very different.

Music
I have now heard Garth sing in many locations, the last time was at the Walled Off Hotel in Bethlehem last November at the end of our Walk the West Bank trip. The injustices that the group had witnessed and heard about from the previous two weeks were given words and each song was greeted rapturously. It is this incredible gift that Garth has to sing of awful situations, yet at the same time instil in people renewed hope.

I often find the songs have the greatest impact for me, when Garth is performing a concert in a church. It feels as if the very fabric of the building is joining in, or at least breathing again; that they have been waiting for so long and finally, someone has sung these songs of freedom and justice inside them.

Garth and Gill
It was evident from the first moment that Garth and Gill were a team, that they worked together incredibly well and that their strengths complimented each other. Gill’s passion for justice and the outrage she felt, was even greater than Garth’s. Each time we would come to a road block or an IDF patrol, Gill would be swearing under her breath before then turning round to apologise. I am so grateful for all that Gill has brought to Amos and continues to bring — we definitely would not be around now if it was not for their partnership.

Partners
The next over-riding impression was of their deep friendships with so many of the people we visited, whether that was Wisam Salsaa (who was then our tour guide), Zoughbi at Wi’am, Naim at Sabeel or Bishop Riah and so many (of what were then seen as the young) clergy coming up through the Anglican diocese of Jerusalem.

I have since seen the fruit of these friendships, not just in Palestine, but also in Uganda, India and most powerfully, Nicaragua with CEPAD from whom we have and continue to learn so much. I hope that this deeply relational approach will always be a hall mark of our work and that Amos’ supporters recognise it in us.

Theology
Garth and I have a shared commitment to Liberation Theology and the spirituality associated with it. Meeting theologians involved in the struggle for rights and justice in Palestine and understanding the context of Jesus’ words and teachings, inspired me. I came back from that first trip knowing that Jesus was speaking to me when he said, “Blessed (get up and do something) are you who hunger and thirst for justice”.

Months after this first trip, Martin Evans (a mutual friend who went on that first trip), suggested to Garth and I that we should consider working together and for me to join the Amos team. As we pursued these conversations, (I joined in April 2006), I realised that it was not just the commitment to promoting justice and to creating a platform for forgotten voices to be heard which had inspired me (and continues to do so), about Amos, but that in Garth there was someone who I could learn from, and who would help me understand what it meant to be called to and involved in a prophetic ordained ministry and remain in a church that represents so much of what we speak up against.

Inspiring
I know many other people are also deeply grateful for Garth’s ability to explain and to inspire, but what I have experienced even more than this is his ability to listen and to speak truth and wisdom into a situation. For the last 7 years since I took over as Director and Garth stood back from running Amos to take on the role of Founder, it has been great to bounce ideas off him and to reflect on whether some of the dreams and ideas that drive Amos forward hold together.

I know I will still occasionally be phoning Garth about this. I also know that through the Garth Hewitt Foundation, he will still be creating and recording new songs, and publishing prayers and reflections. I have no doubt that retiring from Amos will not dim his passion or his creativity — if anything, I think it will focus him even more.

Thank you Garth, and thank you Gill, for so very much.