How to mark the 100th anniversary of the Balfour Declaration in November? You can be sure there’s going to be no end of bad ways. Amos trustee Robert Cohen writes. 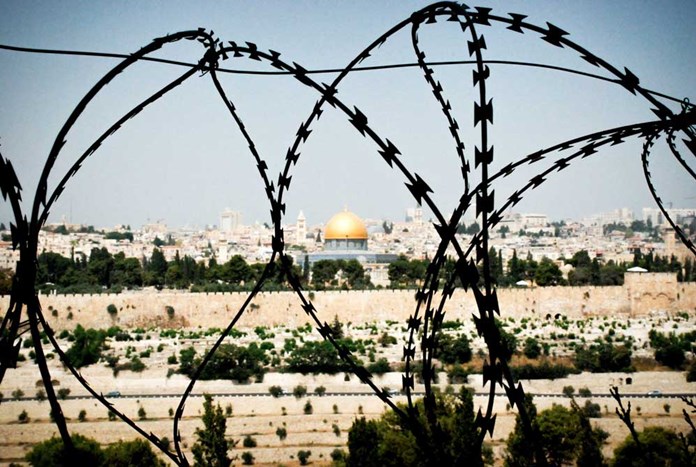 Jerusalem today – taken from the top of the Mount of Olives, near the Garden of Gethsemane. Photograph: © Amos Trust/Nick Welsh 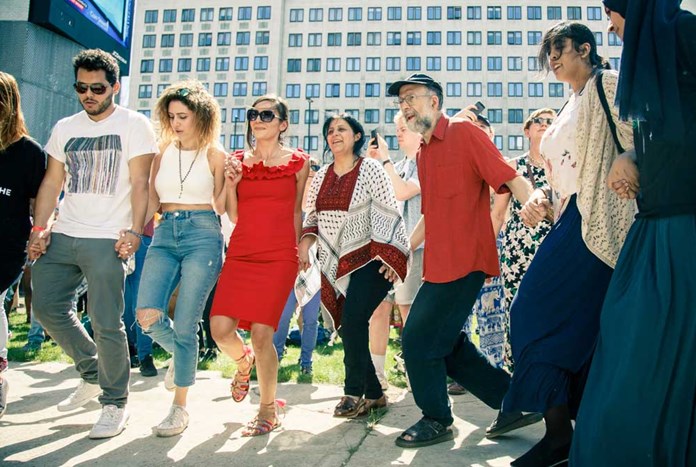 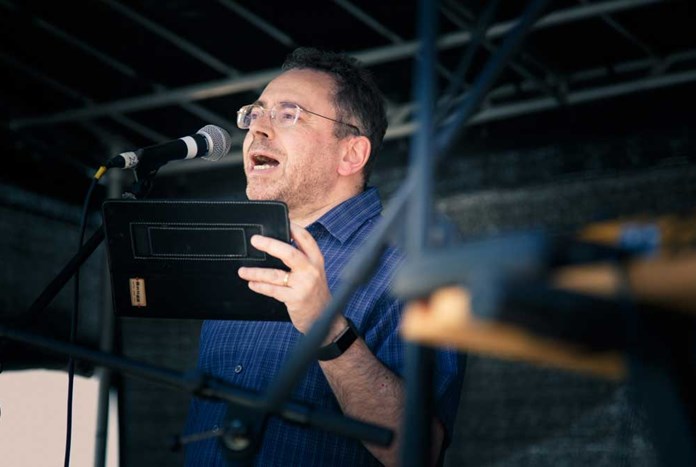 Amos trustee and writer Robert Cohen speaking at the launch of the Just Walk to Jerusalem on London's Southbank on 10th June 2017. Photograph: © Amos Trust/Mark Kensett

Making the invisible, visible: a Jewish reflection on the Just Walk to Jerusalem and the Balfour Declaration

How to mark the 100th anniversary of the Balfour Declaration in November? You can be sure there’s going to be no end of bad ways.

They’ll be bad because they will make the same mistake as the Declaration itself. They will make the Palestinian people invisible, just as Balfour himself did by describing the indigenous majority living in the Holy Land in 1917 as merely the “existing non-Jewish communities in Palestine”.

From that British failure to recognise the right of Arab Palestinians to self-determination and by offering promises it had no right to make and, for the Palestinians, couldn’t keep, has flowed a hundred years of conflict and pain. And yet Theresa May has insisted that our nation will mark the centenary “with pride”.

The failure of a century ago is being repeated today. You can only believe that pride is an appropriate response to Balfour if you allow the Palestinian people to remain invisible. Because Balfour is not history. It’s current affairs. The consequences of those 67 words of British imperial realpolitik are still playing themselves out everyday in Jerusalem, Gaza and Hebron, in fact everywhere west of the Jordan river.

And yet Theresa May has insisted that our nation will mark the centenary “with pride”.

Remembering Balfour, both yesterday and today, crystallises the on-going tragedy of Israel/Palestine. The document which created the possibility of a Jewish State for the most oppressed people on earth, inevitably led to the dispossession of another people. The ambitious project of Jewish national renewal could not have played out in any other way.

So how should Balfour be remembered? What’s an honest way to mark this centenary? One that carries with it not only a rounded understanding of history and politics (likely to be in short supply) but one that includes a degree of humility and an outlook for peace that does not lose touch with justice?

Equal Rights and Visibility
There is no pre-Balfour world to return to. The clock cannot, and should not, be turned back. Whatever the rights and wrongs of Zionism, the Holy Land is now home to six million Jews who have rights as well as obligations and responsibilities. When we say, “Palestine must be free, from the river to the sea” that cannot mean a Palestine free of Jews.

The commemoration of Balfour must acknowledge all that has taken place since 1917 but it must also look to the next 100 years. And that’s what the Just Walk to Jerusalem is doing through its simple call for equal rights for all who call the holy land home.

There is no pre-Balfour world to return to. The clock cannot, and should not, be turned back. Whatever the rights and wrongs of Zionism, the Holy Land is now home to six million Jews who have rights as well as obligations and responsibilities.

This is the appropriate way to commemorate Balfour. Everyone becomes visible. Everyone is honoured, respected and protected. It’s a clear and simple call. But it’s surprisingly controversial. The Just Walk is about making that call for equal rights an idea that sounds as normal and reasonable as it does for any other part of the world.

The Prophetic Tradition
Last Autumn I became the first Jew to become a Trustee on the Board of Amos Trust. I’m glad to have found a spiritual home in an incredible organisation that draws its courage and inspiration from a Hebrew prophet. 3,000 years ago it was the prophet Amos who cut through the hypocrisy and denial of his own community with a passionate, raging and poetic call for justice.

He too set out to make the invisible, visible. His call was also clear and simple: justice and righteousness. Amos and his fellow Hebrew prophets certainly have a lot to answer for. They created a tradition. A tradition of principled, radical criticism of oppressive power. A tradition that I, and a great many other Jews, think of as our primary Jewish inheritance. It’s the values of the prophetic tradition that remain true when so much else has become corrupted.

It’s not widely understood, but there are many Jews in Britain deeply troubled by the actions of the State of Israel. Sometimes it feels like we are the last remnant of that prophetic tradition of Amos. Many of those ‘bad ways’ to remember Balfour will be led by my own Jewish community in Britain. And some will be led by Christian groups too. They will all fail to find room for a single Palestinian.

By contrast, as our Amos Pilgrims complete the final stage of their journey they will be joined by our long-term Palestinian partners in justice. And they will be more than just visible. Hearing and sharing their story, and providing a platform for their daily experience of the politics of ‘Balfour’ in 2017, is one of the primary objectives of the Just Walk.

It’s not widely understood, but there are many Jews in Britain deeply troubled by the actions of the State of Israel. Sometimes it feels like we are the last remnant of that prophetic tradition of Amos.

Making the Palestinian people visible, in the full richness of their history and culture, will be good news for the Jewish community too, both in the State of Israel and around the world. Because for me the most profound legacy of Balfour is that the future for Jews and Judaism is now entirely bound up with the success or failure of our relationship with the Palestinian people.

I’m in no doubt that full visibility and equal rights for all would put us on a better road for the second 100 years of Balfour.

Robert Cohen is Head of Executive External Communication for the Co-op Group. He began his career in broadcast journalism and spent nearly 10 years with the BBC working in local radio and Radio 5 Live.

Robert has become well known for his Jewish advocacy for Palestine through his blog Micah’s Paradigm Shift and his public speaking. Robert and his wife Anne first travelled to Israel/Palestine with Amos Trust in 2011.