Walaa Sabah from We Are Not Numbers in Gaza writes about the killing of Palestinian journalist, Shireen Abu Akleh. 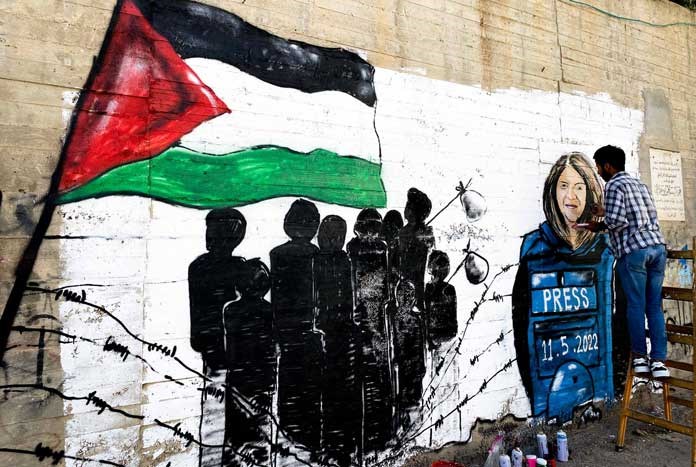 Heartbreaking news: A fresh mural being painted in Bethlehem to commemorate the killing of Palestinian journalist Shireen Abu Akleh — May 2022
— — — — — — —

We Feel Her Absence: The Killing of a Journalist
Walaa Sabah

When I was a child, one of our neighbours in Gaza was a TV journalist, and she would let me wear her press vest. There I was, in a too-large navy-blue vest, holding the pestle that my mother used for crushing spices like a microphone, pretending to read the news from an Al-Jazeera news ticker.

I would always end the ‘report’ by identifying myself as the Palestinian press icon: “Shireen Abu Akleh, Al Jazeera, The Occupied Jerusalem.”

And when I used to hear Shireen on TV, I would jump from my bed to finish her usual sign off: “We will keep you posted on any developments.”

When I was moving from Gaza to Khan Yunis, where my grandma lived — in the days when the Israeli military was still in Gaza — I would stand at the checkpoint and imitate Shireen Abu Akleh while looking right in the soldiers’ eyes.

I would point to the sniper and tell how my family suffered to see my grandma, who lived in Khan Yunis, in the south of the Gaza Strip from Gaza City, where my family lives. Because of the checkpoints set up by the Israeli military, the trip, which now takes 30 minutes, could take 15 hours.

Along with my family, we used to eat our breakfast, lunch, and sometimes dinner at the checkpoint. And whenever mum went to ask soldiers to let us in, they would ask her to go back and never approach them again.

When I was a child, one of our neighbours in Gaza was a TV journalist, and she would let me wear her press vest. I would always end the ‘report’ by identifying myself as the Palestinian press icon: “Shireen Abu Akleh, Al Jazeera, The Occupied Jerusalem.”

I grew up witnessing all this suffering and spoke about it all. My mum once had to leave me with my grandma for a while for some family issues. I was six years old, and she was supposed to pick me up a month later, but this extended for a year, as she was not allowed to get in. When she finally was, I went to the checkpoint again, pointed at the same soldiers and told my story. But did it change anything?

In 2020, I landed a job as a newscaster. But, I continued watching Shireen’s videos and imitating her delivery. I was happy when I saw her happy, and I agonised when I saw her sad.

At 7 am, on May 11, 2022, I woke up to the news of Shireen Abu Akleh’s killing by the Israeli Occupation Forces (IOF). Like most Palestinians, I burst into tears. My heart cracked at the news. It took me the whole day to absorb it: Shireen is gone forever. At first, I thought this was only a nightmare, that I was not awake yet. I tried to get back to sleep, hoping it would go away, but this was the truth.

A report from CNN corroborated the accounts of Shireen’s colleagues and provided new details showing that she was killed in a targeted attack by Israeli forces.

That morning, Shireen was covering an Israeli raid on the Jenin refugee camp on the West Bank. Along with two colleagues, Ali Al-Smodi and Shaza Hanaysheh, she provided their documents at the Israeli checkpoint and identified themselves. They were wearing their protective press vests and helmets and kept themselves all in one group.

When I was moving from Gaza to Khan Yunis, where my grandma lived — in the days when the Israeli military was still in Gaza — I would stand at the checkpoint and imitate Shireen Abu Akleh while looking right in the soldiers’ eyes.

In an interview with Al-Jazeera, Al-Smodi said: “When we arrived at the camp, there were neither clashes nor shootings from any side; the area was calm.” However, Hanaysheh added, “The moment we stepped out of our vehicle, the Israeli army shot three live bullets. The first missed Ali, but the second hit him in the shoulder. Shireen shouted, ‘Ali has been wounded!’

“Then the third shot hit Shireen directly in the head, right beneath her ear, where the helmet does not cover. I tried to reach her to provide first aid, but the sniper continued shooting for three minutes at least, and the ambulance was not allowed to get in.” 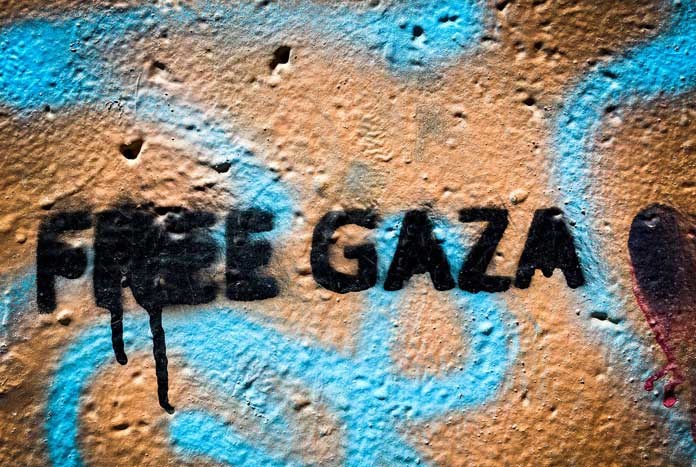 Shireen, to Palestinians, was a press icon. She lived in Jerusalem but travelled all over Palestine, conveying the Palestinian narrative and standing for human rights. In more than 25 years of broadcasting, Shireen has become a household name — and a household voice — familiar to nearly everyone.

Like me, children used to imitate her while the elderly felt safe seeing her around. To the youth, especially, she was a role model. Her death has fractured something in their hearts and minds.

“I chose journalism to be close to people,” Shireen once told Al Jazeera. “It’s not easy to change reality, but at least I make their voices heard to the world.”

Her dedication was so complete that Shireen chose not to marry but preferred to dedicate her time to documenting the injustices experienced by the Palestinian people. Walid Al-Omari, a colleague, said that “Shireen sometimes worked twenty hours a day and never complained.”

Shireen, to Palestinians, was a press icon. She lived in Jerusalem but travelled all over Palestine, conveying the Palestinian narrative and standing for human rights.

She had suffered many losses in her life. First, she lost her mum to cancer a year after joining AlJazeera in 1997. Then, her dad passed away a year later when she was only 26.

The week she died, Shireen changed her days off and decided to work on Wednesday so she could spend more time with her brother, who was scheduled to visit from America on Friday. Destiny had a different plan, though, and he buried her instead.

Even after she died, Shireen managed to connect all Palestinians from different religions, sects, and political affiliations. In Palestine, old and young Muslims and Christians and imams and priests walked side-by-side to say goodbye. From Jenin Camp to Jerusalem to the wounded Gaza, Shireen’s body was carried in procession as Palestinians united in grief.

Mourning her death, the national, Islamic, and Christian officials in occupied Jerusalem announced a comprehensive strike for the day of her burial, May 13, 2022. Telling the Palestinian story was Shireen Abu Akleh’s life. Today, the news coverage is not the same and will never be the same.

But the story still needs to be told. We must build on the unity we saw after Shireen’s death as we rededicate ourselves to bravely telling our stories — and standing for justice and human rights. Palestinians must continue to raise their voices, demanding accountability for Shireen’s killing. And the international community must finally take action against the continuing injustices in Palestine.

The day Shireen was killed, a father of twins from the Gaza Strip, Mohammed Thabet, named his first daughter Shireen after Shireen Abu Akleh and the second Jenin, for the Palestinian refugee camp where Shireen was killed. It was a message to the world that Palestinians will continue defending their cause and fighting for their freedom.

Shireen and Jenin Thabet, and all the young children who will never know Shireen Abu Akleh, deserve a different reality than the one they currently face.
— — — — — —

Walaa Sabbah is the community outreach and partnership officer at We Are Not Numbers (WANN). She has travelled to more than ten countries, and has done voluntary work in Africa, worked in Europe, taught children from East Asia and studied in the Middle East. 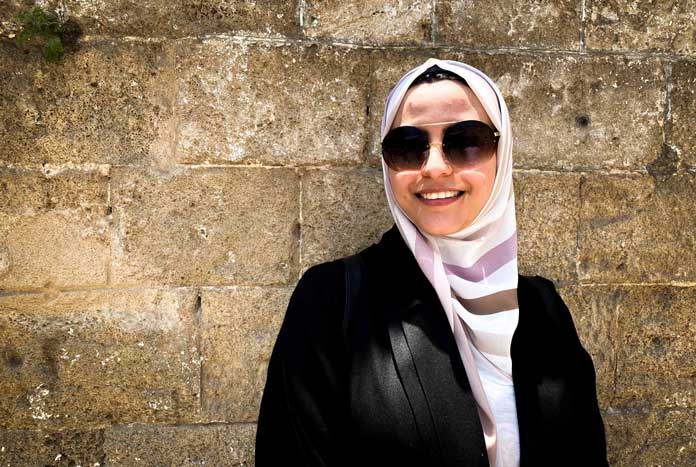 She finished her Bachelor’s degree in English arts and literature at the Islamic University of Gaza and the University of Warsaw. She also completed a one-year diploma in education.

Words Of Hope E-news
Sign up to receive our regular ‘Words Of Hope’ emails and keep up to date with all the latest Amos news and information, including details of our trips and events, news from our partners around the world and all of our campaigns.