“The sense of outrage has now reached fever-pitch levels in South Africa. But it is nothing new for Umthombo’s staff as they continue to reach out and journey alongside the young women and girls on the streets of Durban.” On Her Terms lead, Karin Joseph, writes about the tragic increase in gender-based violence in South Africa. 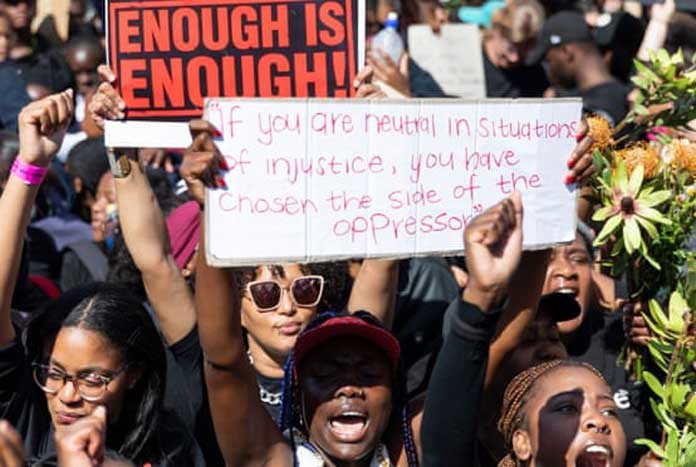 Women wearing black and purple marched in protests this week in Cape Town to remember those women and girls who lost their lives in one of the deadliest months of gender-based violence South Africa has seen.

Last month, Uyinene Mrwetyana, a University of Cape Town student, was raped and murdered in Cape Town when she went to pick up a parcel from the post office. Uyinene’s murder became a tipping point for South Africans campaigning for gender equality and the end of femicide and gender-based violence, which has spiked considerably in 2019.

Maite Nkoana-Mashabane, the women’s minister, stated that 30 women had been killed by their spouses in the last month alone. Statistics show that a woman is murdered every 3 hours in South Africa. The protesters’ actions are not limited to remembrance. The rallying cry and hashtags used by women, #AmINext, and #EnoughIsEnough, demonstrate the fear and anger felt by women who feel this is a national crisis which has been neglected for too long.

A nation-wide shutdown was called for on Friday 6th September, and protesters  demanded a national state of emergency be declared, with more protests and church vigils planned over the weekend.

Uyinene’s murder became a tipping point for South Africans campaigning for gender equality and the end of femicide and gender-based violence, which has spiked considerably in 2019.

The sense of outrage has now reached fever-pitch levels in South Africa. But it is nothing new for Umthombo’s staff as they continue to reach out and journey alongside the young women and girls on the streets of Durban.

Mpendulo Nyembe, director of Amos partner Umthombo, said it was a sombre time for South Africa, particularly for the most vulnerable women including those on the streets.

“Women are fearful,” Mpendulo explains. “Especially the girls that we work with, who are still exposed in the street and have nowhere to go — they still have to go back to the same situations and environments.” 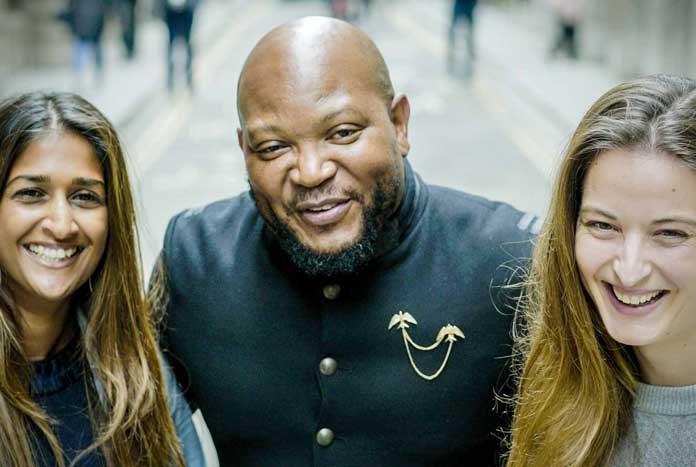 The life of Sibongile*, 21, a young woman supported by Umthombo, has been marked by gender-based violence. Life on the streets for Sibongile began at 14, after her grandmother had been charged and imprisoned for the murder of a man who’d invaded their house with the intent of sexually assaulting Sibongile.

She survived on the streets for seven years, living an abandoned building with other girls. She became a mother to two young children.

Umthombo’s relationship with Sibongile took time to build; trust was hard to develop. But once she decided, on her terms, to engage with the programme, the staff began to learn what her passions were (such as returning to education and finishing her high school diploma) and helped her find ways to leave street life with her two children. Thanks to Umthombo’s help, she is now living back with her grandmother who was finally released from prison on appeal.

Sadly many girls and young women on the streets remain in a situation where it is highly likely they will be raped or assaulted.

She survived on the streets for seven years, living in an abandoned building with other girls. She became a mother to two young children.

When women are not seen as equal, the violence perpetrated against them is often not seen as the outrage it truly is. The lives of girls on the streets are given no value, so their experiences of gender-based violence are seen as normal, or expected.

Perhaps the tragic tipping point reached in August 2019 will finally lead to change for all women and girls across South Africa, including girls on the street.

If at this crucial time, you would like to support Umthombo’s work with girls and young women on the streets of Durban, helping them to work through traumas they’ve experienced and on their own terms find alternatives to street life, please consider donating today.

Please visit our website for more details of our On Her Terms campaign and Umthombo, our partner in South Africa.