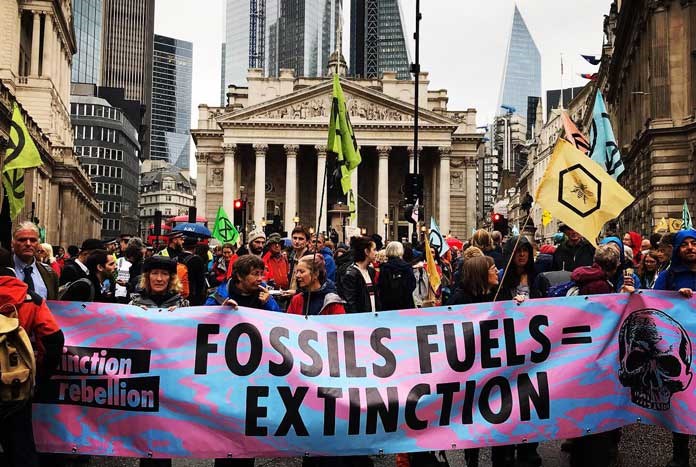 Last Monday I was arrested sitting on the north side of Lambeth Bridge, on the first day of the Extinction Rebellion climate protests in London.

After the first week of the protest, I am one of around 1300 people arrested. It is not something that I have done lightly or without serious consideration and I recognise that it is a controversial action. The following is my account of what has led me to this point.

It is something that I am doing with the next generation at the forefront of my mind (my children Molly & Millie Grace included) and for their chances of a sustainable future. We are on the very edge of falling into runaway climate change, that we will have little ability to control and no capacity to stabilise. This would certainly lead to a dystopian future.

A few years ago I was watching the documentary film Six Degrees with our eldest daughter. The film runs through the climate science of the impacts of each degree of global temperature rise. Suddenly from behind the sofa I heard a sobbing from my youngest daughter, who I thought was in bed, and she said “Daddy I can’t watch this, its going to give me terrible nightmares”.

After the first week of the protest, I am one of around 1300 people arrested. It is not something that I have done lightly or without serious consideration and I recognise that it is a controversial action. The following is my account of what has led me to this point.

The truth is the film had only got to two degrees warming, something that is quite likely, on the current trajectory, by the time she reaches my age. What to do when you know that, without a dramatic change of direction, the nightmares of your children are likely to become their reality?

Living in the global north as we do, this dystopia is principally a future prospect. For hundreds of millions of people however, largely in the global south, this dystopia is already a reality. We are currently at one degree of warming and already the impacts can be seen in increased drought, fires, floods, sea level rises, crop failure, conflict, migration and displacement. 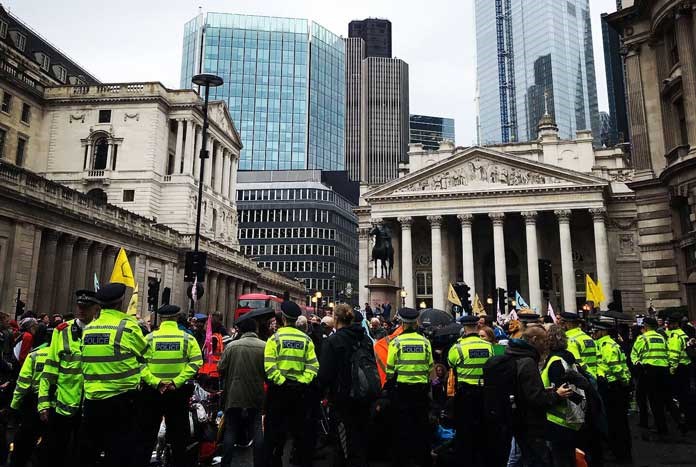 In The City: Police surround Extinction Rebellion protestors and supporters outside the Bank of England in London — Monday 14th October, 2019

It is a reality that the harshest effects of climate change are felt first and most severely by many of the poorest and most vulnerable people on our planet. The climate emergency is a justice issue. Those of us most culpable for the problem, are the ones most protected from it effects.

What is more, the destructive effects have also been wrought on so many of the species with which we share our beautiful planet. For example, we have wiped out 60 percent of vertebrate animal populations since 1970. The entire ecosystem on which life depends is under threat. This is why the language of mass extinction is not hyperbole or alarmist.

I first learnt about climate change when I got given a book called ‘The Greenhouse Effect’ as the proud winner of a Year 4 school Geography prize in 1989! Thirty years on and what has changed? Global CO2 emissions are still rising at a time when we know, from the recent IPPC report, that we have just eleven years left to at least half our emissions. In fact if we continue on our current trajectory we have just eight years left before we have burnt through our entire ‘Paris’ carbon budget, with no chance of keeping within anything but the most damaging of future scenarios.

It is a reality that the harshest effects of climate change are felt first and most severely by many of the poorest and most vulnerable people on our planet. The climate emergency is a justice issue.

It has been a real privilege to be involved with The Pickwell Foundation these last six years and to be able to focus on what levers there are to try to influence change; education; behaviour change; technology; campaigns; advocacy; lobbying; media; legal challenges; political engagement; divestment to name a few. They are all part of the solution but the dial is not shifting much and it certainly isn’t showing any signs of shifting quickly enough. We are in desperate need of decisive political action that is lead not by expediency, but rather on what science tells us is required.

The last year has seen the mainstreaming of another approach – that of protest and non-violent direct action. This has included both the student strikes, kick started by Greta Thunberg, and the Extinction Rebellion movement. The truth is that there is nothing over the last thirty years that has come close to the impact that these movements have had this year. They have changed the conversation and there are the first signs that they are beginning to change the political landscape. 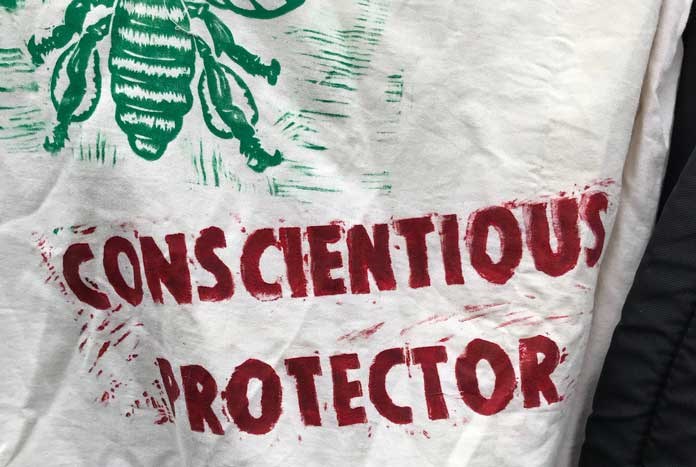 Conscientious Protector: one of many banners from the City of London Extinction Rebellion protest — Monday 14th October, 2019

There is a long history of non-violent direct action to learn from. Many of the social movements of the past hundred years – from the Suffragettes; the Indian independence movement; the civil rights movements; to the anti-apartheid movement; have all used methods of civil disobedience and non violence. Simplistic comparisons between movements are not helpful, but there are some important insights from some of the methodologies used, as well as a rich philosophy of non-violent action on which to draw. For example, Archbishop Desmond Tutu is one who has repeatedly called for the methods of the anti-apartheid struggle to be used to address the climate crisis.

We are in desperate need of decisive political action that is lead not by expediency, but rather on what science tells us is required.

The American activist Bill Moyer identified four roles within social activism; the ordinary ‘responsible citizens’ who are widely accepted by the general public; the ‘change agents’ who work to educate, organise and engage the public to oppose present policies and seek alternative solutions; the ‘reformers’ who focus on solutions through existing political and judicial structures; and finally the ‘rebels‘ who say a loud and disruptive ‘No!’ through non-violent direct action. Moyer argued that individuals and organisations need an awareness of which of these roles they play within the wider social movement. You can read more of his thinking here. Each role has a unique contribution and each is essential.

Up until now the environmental movement has focused on the first three of these roles, but we are short of time, and the rebels now have an important part to play. There are a wide range of contributions for those who see their role as that of a rebel – civil disobedience is at the end of that spectrum. Most people do not have the luxury of being able to practice civil disobedience because of their occupation; position; responsibilities; or commitments and they cannot risk the consequences of arrest. For others, particularly those who are older, it is a contribution that they can make and many, like me, are deciding that now is the time.