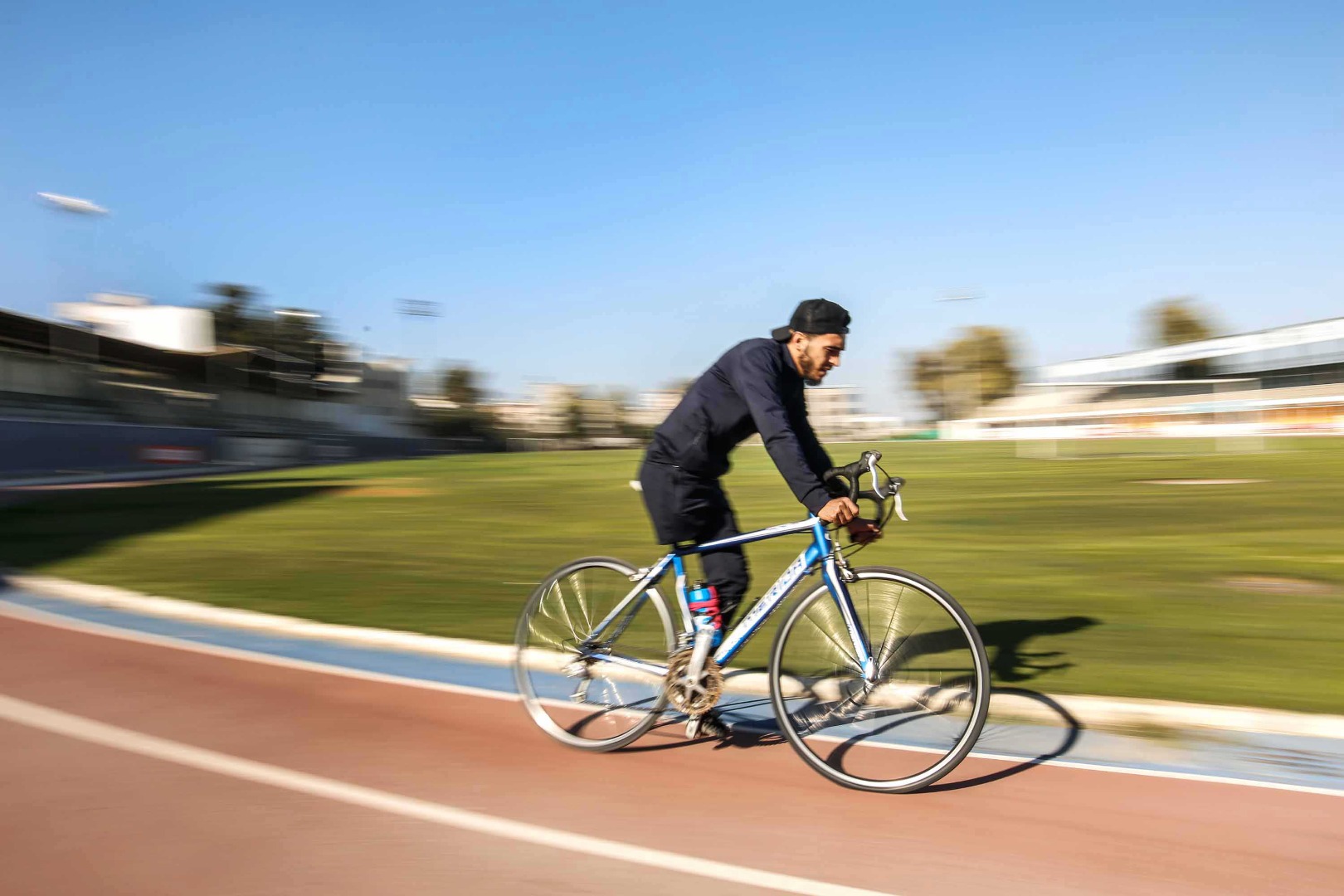 We would like to send a cycling team from Gaza to the Paralympics in France in 2024. By becoming backers of the Gaza Sunbird team, you can help us get this project off to a flying start.

The Original Gaza Sunbird
Alaa al-Dali was an Olympic hopeful cyclist when his leg was shot to pieces by an Israeli sniper on 30 March 2018. 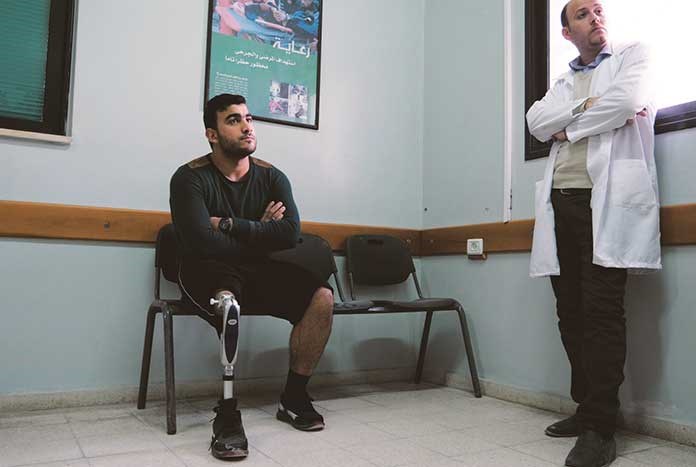 Alaa was standing alone in his cycling gear, with his bike, as he watched a March of Return demonstration, 250 metres from the separation fence east of Rafah.

“The bullet [was] like a small grenade. It almost disintegrated the bone of my leg, 22cm of it. The muscle, arteries and veins were totally damaged. The doctor said he has never seen anything like it,” Alaa says, “I needed to make a choice; either the amputation or losing my life. After thinking a lot, I gave my consent to cut the leg. It was a very hard decision to make.” Quote taken from an Al Jazeera article which you can read in full here.

Despite coming close to death, Alaa has made a good recovery and has channelled his energies into establishing an amputee cycling team within Gaza — called the Gaza Sunbirds. Alaa’s dream is to take the whole team to France to take part in the 2024 Paralympics and we would like to help make that dream a reality.

Through the support of the local cycling community and linking up with a team based in the UK and Brussels, Alaa has been able to access training, facilities and equipment. The team now has six registered cyclists with more waiting to start training. 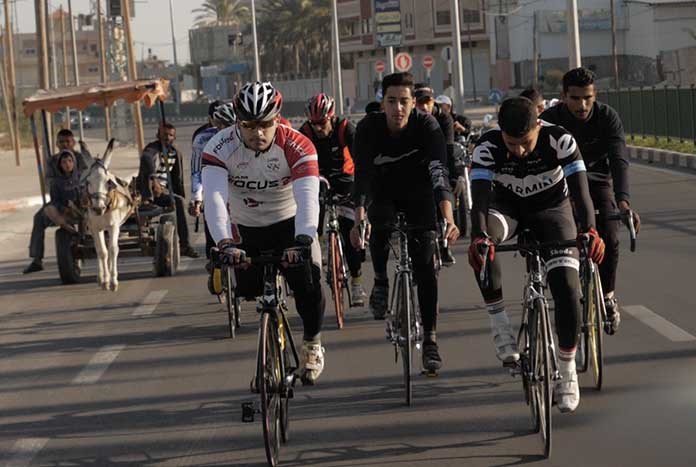 Sport offers the chance of rehabilitation for many of Gaza’s youth who have been physically affected by the impacts of war. Amos Trust, along with youth advocacy organisation We Are Not Numbers who are based in Gaza, wants to help the Gaza Sunbirds to send Alaa and his team mates to France to participate in the 2024 Paralympics.

We believe this para-cycling team has the potential to become a symbol of hope for the people of Palestine and others facing oppression around the world. 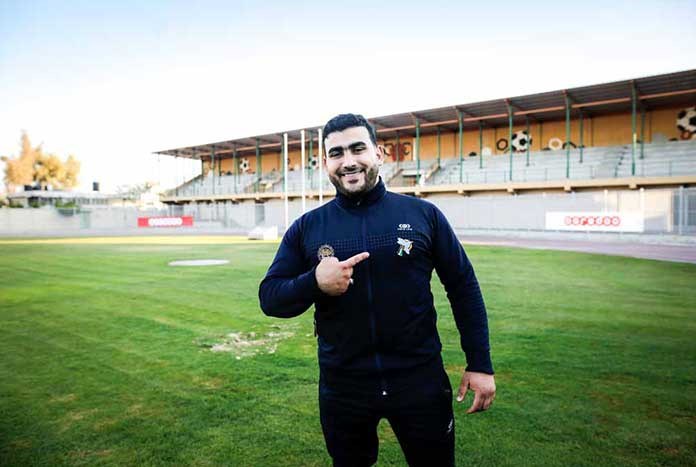 How can you help?

While the Gaza Sunbirds have determination, knowledge and commitment, they simply can’t do this on their own. Thankfully with a strong community of supporters behind us, we don’t think they’ll have to.

By becoming backers of the Gaza Sunbirds, you can help us get this project off to a flying start. In phase one we need to raise £5,000 which will allow the athletes to start training for a local race in Gaza, which is scheduled to take place in late 2021.

Please show your support to Alaa and the Sunbirds team:
We hope to raise enough funds to establish a team of 8 riders. They will each need cycling clothing, helmets and training bikes, as well as gym membership (which will include physiotherapy), training and bike maintenance. We need to raise £5,000 for the first years running costs.

There are two options:

You can make a one-off donation:

You can become a committed giver and join the Sunbirds support crew and help us ensure that we get the team all the way to Paris for the 2024 Paralympics. We need committed supporters to donate a regular monthly amount:

One of the ways that we will be supporting this project is to produce a film documenting Alaa’s journey to Paris. We will be calling on you to share this story far and wide so that when the time comes for us to access the world stage, we will be ready. For now though, you can watch ‘Cycling Under Siege in Gaza’ (Al Jazeera’s 14-minute documentary) here.

If we’re really going to make it to Paris, we’re going to need everybody’s help. We are the Gaza Sunbirds — please help us take flight.

Ahlan Gaza (Welcome Gaza) follows the simple stories of people living in Gaza, people trying to live with dignity as their options close in on them each year.

Watch and share our short campaign film, ‘Open The Borders’.

Read more about Amos Trust’s work across the West Bank and Gaza.