I had never been to the Middle East and very much wanted to go to Palestine so when I got the call from Amos Trust about the potential of a filming trip, I was on it like a hot knife on butter! Film maker Pip Piper shares his experiences of filming in Palestine with Amos Trust. 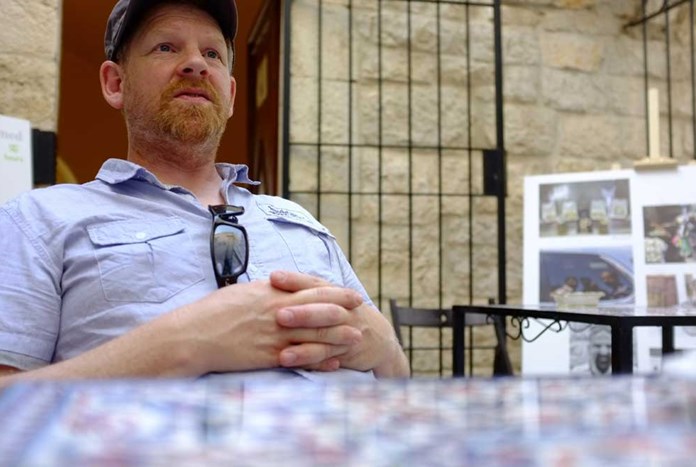 Pip Piper from Blue Hippo Media joined us in Palestine in August 2015 to make a series of short films about our work in the West Bank. 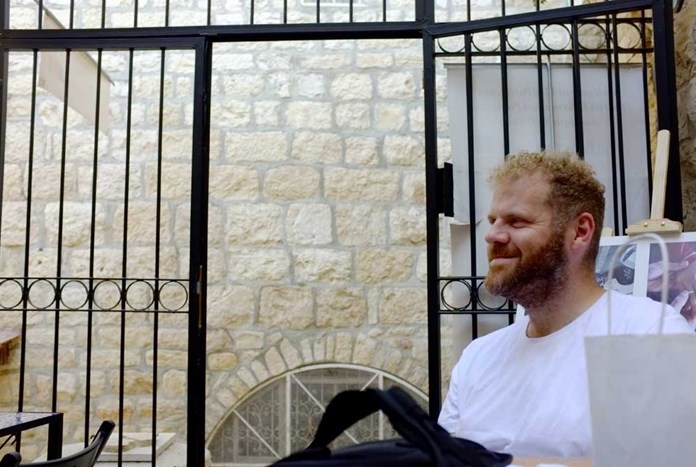 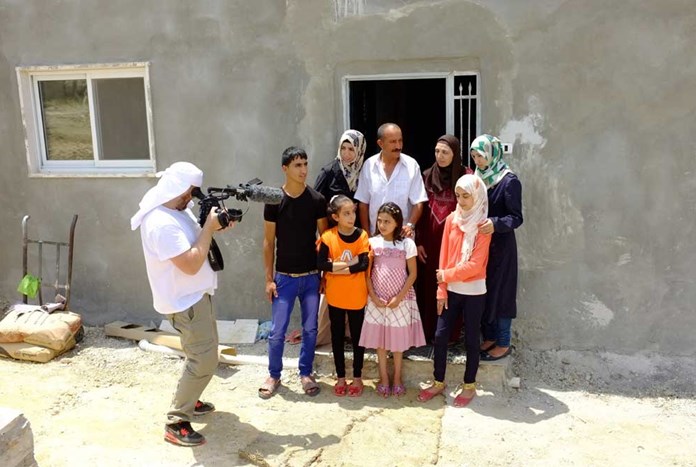 Dave in action, filming the family who now live in the home that Amos rebuilt in Spring 2015.

I have been making films for the past 20 years, films that have taken me to many different areas of the world. I have been privileged to encounter many wonderful people often in difficult circumstances finding ways to make sense of and to live their lives.

However, I had never been to the Middle East and very much wanted to go to Palestine so when I got the call from Amos Trust about the potential of the filming trip I was on it like a hot knife on butter!

After many a meeting with the good and very creative people at Amos Trust we had a plan and myself and David Cawley, my long-time cinematographer found ourselves at Luton airport very early in the morning on 1st August 2015 with Nive and Nick from Amos Trust, ready for our 10-day trip.

I must admit despite my extensive travels it is still very possible to go with pre-conceived and uninformed ideas about a place. I did wonder what I would find in Palestine. I knew of course about the wall, some of the history of the region and the on-going conflict, but I was to find that I really did not know the full extent of the “apartheid” and the deep, current and on-going trauma that fuels the situation.

After many a meeting with the good and very creative people at Amos Trust we had a plan and myself and David Cawley, my long-time cinematographer found ourselves at Luton airport.

We arrived in the dark, something I really dislike as you feel you have not been able to at least see something of the landscape and orientate yourself a little.
After about an hour of driving to get to Bethlehem, we arrived at the checkpoint and wall that the Israelis have erected. I was soon to discover that getting in was easy and fast but getting back out was a different matter, especially for Palestinians.

The purpose of the filming was to capture short stories and imagery that would reveal what Amos Trust and its partners have been doing in the West Bank and Gaza, the occupied territories. Based out of Bethlehem, over the next several days we travelled around the West Bank, meeting people and partner organisations and despite the often-crippling heat (42 degrees!), were able to capture some really wonderful footage.

One thing I was really aware of was 'history', we think in the UK we have history, well I was very aware that I was IN history, it was everywhere!

One of the real privileges of making films is where the camera allows you to go and on this trip it enabled us to enter peoples homes, communities and lives. My senses, taste buds and spirit were subjected to a smorgasbord of emotions and experiences that will live with me for the rest of my life.

The purpose of the filming was to capture short stories and imagery that would reveal what Amos Trust and its partners have been doing in the West Bank and Gaza, the occupied territories.

A family whose humility and gratitude at having their home rebuilt by Amos Trust in conjunction with Holy Land Trust, was very moving. People who despite having myriad reasons to hate and fight, have chosen the path of peace and their lives were humbling and inspiring.

I was very pleased we were able to leave our own piece of ironic graffiti emblazoned upon a wall that was the most visually arresting object in the whole of the trip and offended deeply my sense of humanity and justice. You will have to wait for Christmas for that to be revealed!

One of the key components for the filming was to capture the essence of the wonderful Bet Lahem Live Festival, now in its 3rd year. What a truly wonderful act of beautiful resistance, a colourful celebration of life through art and music featuring UK, international and local artists.

One thing is for sure, I will return to Palestine and I will most certainly be doing whatever I can to support the awesome work of Amos Trust and their partners.
I hope you enjoy the films we made.

Pip Piper is a filmmaker based in Birmingham. His company is called Blue Hippo Media.