“In Gaza we live a tragedy, desperately trying to survive. We try to live, grow up, work and travel, but we are in a prison. But we do not give up.” Fadi — Gaza City. Amos Director Chris Rose writes about the ‘privilege’ of being able to visit our friends in Gaza and why supporting our partner NECC is as important now as it ever was. 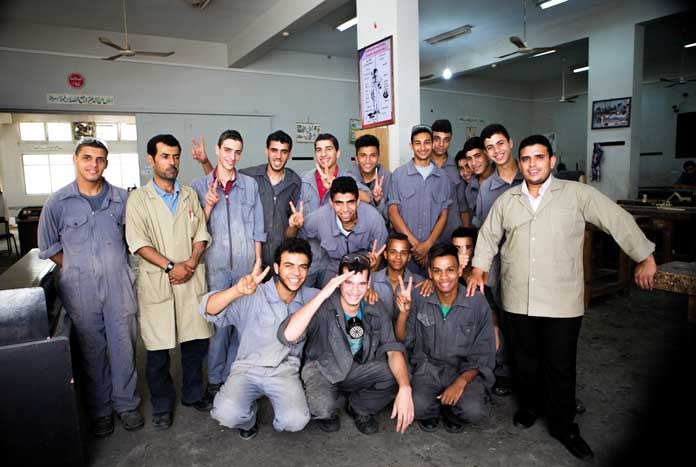 Some of the young men from NECC’s woodwork department pose for the Amos cameras — June 2016. The vast majority of graduates from the NECC programmes are able to gain employment upon graduation even though work is often precarious.

In Gaza we live a tragedy, desperately trying to survive. We try to live, grow up, work and travel, but we are in a prison. But we do not give up.” Fadi — Gaza City

As the title rolled at the start of the film ‘Gaza’ at Amos Day in London back in September 2019, I could feel an unbearable sadness welling up in me.

I felt it when I started writing this article — checking the numbers killed and the latest restrictions imposed on 2 million people trying to survive in this 25-mile long strip of land. But my sadness is only the faintest shadow of the pain and anxiety that every day constricts my friend Ahmed’s chest and seems to get tighter and tighter as the situation worsens.

It is a feeling that I imagine each refugee feels, the massive loss and longing for home and family and the daily need for, and yet dread, of news from home. We see the spaces of hope disappearing before our eyes and I feel powerless. I mutter the words of Shelley: ‘Ye are many, they are few’, but I am no longer sure the equation works.

The numbers of casualties from the Great March of Return protests on the Gaza border, are unbelievable. Over 200 killed, (50 of these are children), over 40,000 injured and by the time you read this, 10,000 people will have been shot with live ammunition — the vast majority shot in their legs. The numbers of amputees and permanent disabilities do not bear thinking of in a country where the health sector is on its knees and there are empty shelves where life-saving drugs should be.

But my sadness is only the faintest shadow of the pain and anxiety that every day constricts my friend Ahmed’s chest and seems to get tighter and tighter as the situation worsens.

10,000, predominantly young people, so many of whom now live with a life-changing injury, carry on protesting because they see no other option open to them. Jane, one of our Trustees, Luma her daughter, and Nick from our team recently visited Gaza.

Over the next months you will meet a number of these people through our Ahlan Gaza campaign. You will meet young people that Luma sat and laughed with, women Jane chatted with on the beach and a whole load of other people striving to live a normal life in Gaza. You will also meet members of the NECC team. NECC runs a wide-range of programmes with families, children and young people. We seek to raise support for their work with young people, as we believe it is so important and is such a source of hope. 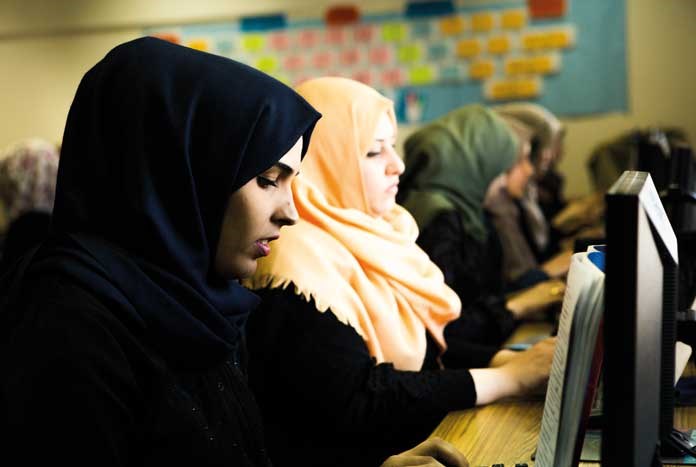 NECC programmes: A group of young women learning secretarial skills even though most of them have good degrees and are hugely over-qualified.

They have been running training courses in key work skills for many years, all of which are oversubscribed. They adapt and change them to fit with labour market needs, working with local businesses to gain a real understanding of where the gaps are and what will be the future needs.

As the situation is so difficult (over 60% of young people and 70% of women, are unemployed), they now provide micro-loans, mentoring and a variety of pathways into employment. This means that the vast majority of graduates from the NECC programmes are able to gain employment upon graduation even though work is often precarious.

We seek to raise support for their work with young people, as we believe it is so important and is such a source of hope.

At the end of 2018, they opened a new course in fitting and maintaining solar panelling to supplement their courses in electric engineering, refrigeration, metal work and carpentry. The wood work and metal work courses are specifically for 14 – 17 year olds who were unable to complete school. This year they have launched a new course for young women in Graphic Design to compliment their existing secretarial and dress making courses.

On my first visit in 2011 I was highly impressed by how they had responded to the impact of the 2008/2009 attack from Israel — Operation Cast Lead, that had decimated Gaza and led to so much loss of life. All the students on the course received psychosocial support to assist with the trauma they had been through.

At the time the assumption was that this support would soon end. Eight years later it has become an essential component of all their training courses. Young people have experienced so much trauma: three major conflicts, the Israeli response to the Great March of Return, on-going bombing raids, the shelling of fishing boats and the ever-present fear that another war is just around the corner.

Children have grown up only knowing the blockade. Its impact on their families (stress, debt and increasing poverty levels), together with the difficulties of gaining work, the impossibility of being able to leave, all compound the reality that without work or a home they will not be able to get married or raise a family. It is not surprising that so many young people see no hope in their future.

All the students on the course received psychosocial support to assist with the trauma they had been through.

Yet meeting the young people in the NECC courses is consistently one of the high points of each visit. Their lust for life, their grounded realistic and determined courage to face the future is such a testimony to the quality of work carried out with these 400 young people and the NECC team as a whole.

Jane concluded her Trustee report: ‘NECC is struggling to operate due to a shortfall in funding and the increasing demand on its services. The removal of USAID from Gaza and the way that international interest has turned elsewhere is a huge problem. However, despite these seemingly insurmountable issues, NECC continues to not only deliver its valuable work in Gaza but also develop new ways to bring hope to young people.’

Please watch and share our short film ‘An Irresistible Future’ about NECC in Gaza City.